And I would be dead without it.  The Army snow was over several storms.  This exceeds any one storm and may already be over the total.  The phillies can now blame the tiny Tonga volcano.  There's no physics to rate the tropical volcanoes, so it can be anything. 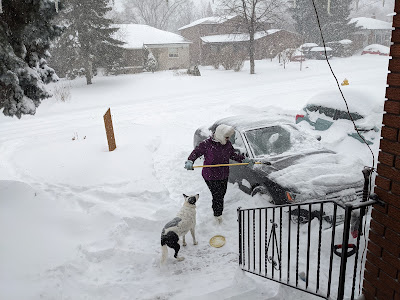 We are over 2ft of flat snow with 3ft drifts.  My snowblower almost had a heart-attack.  It's a Honda 6hp single throw, and you have to push it a lot.  I need a monster 10hp, self-driven with chains.  blah.

It's funny that I was hoping there wouldn't be a volcano for a while, so the phillies get tired of blaming La Nina, after a few years.  Now, I see nasa blaming everything in sight, except their own complicity.  Good thing, this blog is invisible.

ps.  that army storm was nothing compared to this.  Wonder if they'll reactivate the 70's 'Snow Emergency'.  Probably not, since nobody commutes any more.

ps.  Toronto may be suffering a reverse lake effect.  That means the snow won't be measured properly, since the airport is out of that range.  So, it's 60cm so far and 100 cm drifts.  army snow was 40 cm in the first storm, and then a total of 60 over weeks.

pps.  okay, this volcano was a factor of 100 or more less than Mt. Pinatubo, so La Nina is safe as the scapegoat for now.