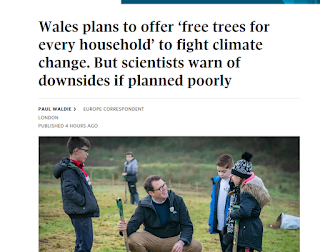 Although 'climate change is real', in a philosophical sense, carbon influence is not acknowledged by the Scientific Method.  The fact that these things are floating without physics (God is Real!), means that any concrete action is doomed to failure, because 'Physics is Real'.

So, let's assume a Mr. Extreme Leftie (Me!).  I don't believe in any physics, because it was all done in 1850.  I am working hard to engineer solutions to clange in my leftie way.  I'm a firm believer in that everybody should live my hairshirt life, as long as I get speaker fees, and youtub money.

I realize that every single effort so far has failed, but I keep trying.  My main solution is to lower the standard of living and to kill everybody, except me.  I whipped up a virus in my kitchen and released it in China to throw everybody off.  It killed millions and totally destroyed the world economy, but what did it do?

So that's a big poohey.

Ok, so let's plant trees.  Look at that picture.  That's a big, thick turf that will be killed by trees.  If you let sheep graze, or mulch the grass, it's tens times better than trees.  Ok, let's erect big solar cells over the grass and kill it.  Those solar cells are made with slave labour and coal.  Yeah!  Net impact - zero.

In Ontario, we can build a big dangerous, boiling water nuclear plant and call it small. 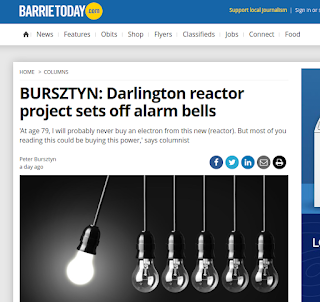 At least it's better than solar cells in the snow belt.

This sad.  Leftie-Me can't do anything for the coming year.  Back to the virus drawing board.  I'm mixing Ebola with the common cold.  One sneeze and you're dead!

ps.  that's my max for super-snarky.  I've got to deep breathe now.