We had some cooler weather, then on Saturday, the bass season opened with a strong wind.  The cottage neighbour said the fish were practically jumping into the boat.  He didn't know we were coming up and tossed them all back.

Then the next couple of days, all the fish stopped biting.  Blah.  Now it is very hot and no fish.

tues- stagnant air.  Crazy younuns are windsurfing on the millpond lake.  I'm waiting for them to give up and call on me to rescue them with the boat. 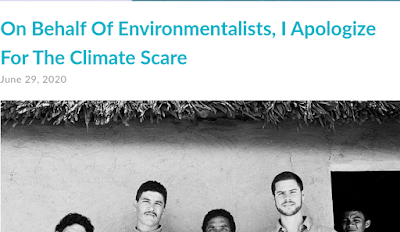 This is fun.
Posted by Harold Asmis at 12:57 PM No comments:

This is exciting.  As temperatures were climbing, the headlines read 'Hottest Year', then '2nd hottest year', then 'In the top 5', and now we down to 'top 10'.

Climate -- Clubbing us with the worst projection 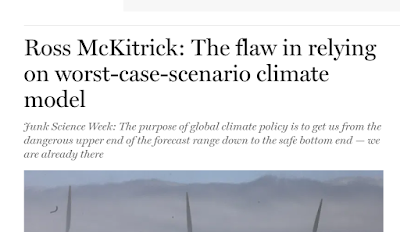 How to create a scary headline:  take the worst projection and go to town with it.

The worst projection assumes that the world is rich and everybody is burning coal.  Not going to happen.

To make the article complete, he should have put in some physics. 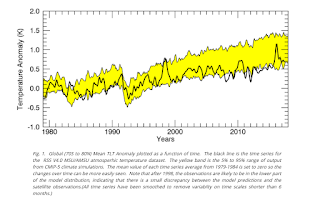 I don't even think the top of the yellow is 'the worst case'.  However, I'm always happy when somebody puts in an intelligent article.  Not that it makes any diff.  There is too much money in the scare industry, and nobody can back down.

Weather is a big mucky mess for the next week

This is a map of the tropical plumes which are the only thing to give us 'weather'.  Stagnant clear air is either really hot or really cold.  Warmies don't understand that.

Anyway, we have for the first time in a month, an incursion from the Pacific.  We will not have a stagnant heat wave.  Instead, it's 'Anything Goes'.  Hopefully, the weather is nice.

This is also the type of air that could stir up the fish in the lake.  Opening Bass Season!  Yahoo.  I have a chance for my once in 10 years big fish!  Or, the neighbour can give me one.  I win either way.


Posted by Harold Asmis at 4:21 PM No comments:

So, the middle son was getting married in the Ukraine because the girl is from there.  That's all blown out of the water now.  We've been quite lucky because we went through justfly.com and the first leg to Paris was cancelled.  I just followed their instructions and everything was cancelled in two minutes, with a full refund on the credit card.

Not so lucky are the other people.  They can only cancel a flight by phone, and nobody is answering.  They are going to have to use the 'credit charge back' method if they can.  The more direct flights to Poland and Ukraine aren't being cancelled.  Ukraine is now 'open' to tourists provided they rot for 2 weeks in quarantine.  Blah.


Posted by Harold Asmis at 2:53 PM No comments: 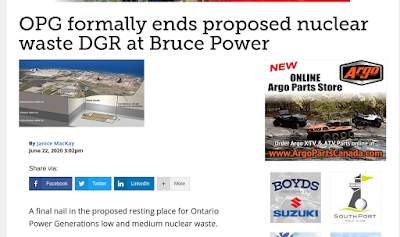 The end of an era for me.  I opposed this with every ounce of feeble effort and my 10 readers.  This parrot is dead.

Now, just a stone's throw to the south, the exact same people are pushing another waste disposal black hole.  They will use the same methodology, and will earn lots of money.  The indigenous people will never figure it out.

I will oppose it with great non-effort.  It is the same geology.  It is on the same huge fault.  Everything is same.  Stay tuned, same time, same channel.  It will end the same, but like the Niagara Tunnel to Nowhere, lots of people will make money.  Not me.  :(


Posted by Harold Asmis at 5:13 PM No comments:

This reversal was coined 'Indian Ocean El Nino', but it had little energy, and didn't really do anything much to the world temperatures.  The effect was local.

If we had physics in the world, we would have an energy-based definition of the El Nino effect.  But, no.  The next ocean current map should show most of the Indian Ocean going back to a normal flow of east to west.  Or, it could keep going for a while, who knows?  Nobody does physics. 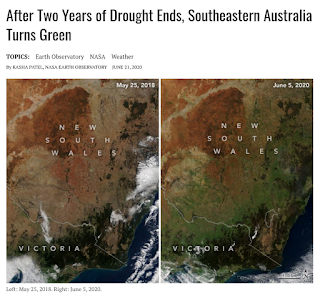 As we know, the whole greta thing has been propped up with carefully chosen stories.  Somewhere in the world there is a heatwave, or a drought.  The last big story to fall is Australia.

So, now the Australia story falls, just like Antarctica.  Australia has suffered from a tropical plume 'lock', just like all the droughts.  That means no water for them until now.  A plume has curled up and hit them from below.  Yeah!

For us, we have a plume lock from the Pacific, but the Gulf plumes are fine.  Now we get some cooler air pushing that away.  Looks like our heatwave is over, and I don't even think we got a story out it.  Maybe next time, it's bound to get hot again sooner or later.  I can swim in the cottage lake again, better than last year.

ps.  the UK is getting a 3 day heatwave that the tabloids are going ga-ga over.  The hair-shirt guardian probably won't make a comment.

pps.  so, on our 'ice age' buying list is the world's best compost bin, insulated.  I just started it and got super-hot temperatures during this wonderful heat wave.

ammie kicked me out of the 'associates' thing, so I don't get any money for the listing, not that I ever did. 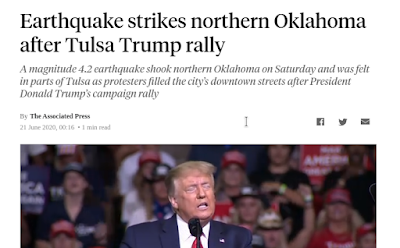 A tiny M4 to 5 shook Tulsa.  Just when I was giving up on those earthquakes.

Posted by Harold Asmis at 7:49 AM No comments: 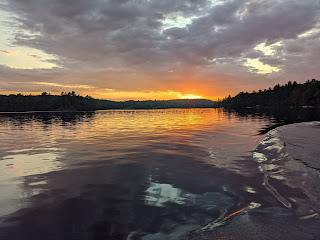 Sunset on a hot night.  The downside of living in a tin hut is trying to sleep at night.  The younguns went swimming at night, which always helps.  The water is finally warm enough for me to swim.


Posted by Harold Asmis at 7:17 AM No comments:

Cold air swoops down on us, heat wave in Siberia

While the Northern Hemisphere is unusually cool this June, the guardian promotes a Siberian heatwave. 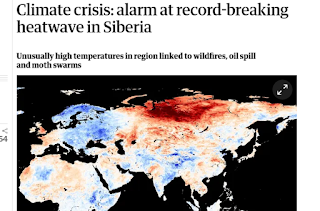 If the warmies ever used charts, they would see that the 'heatwave' is caused by some plumes going through Europe and hitting Siberia.  I don't think most of us would call this a heatwave.

Our little heatwave is ending next week.  The UK is getting it and the tabloids are on fire.

All in all, we are falling into my prediction, made years ago, of an ice age cycle.  All caused by the shift in ocean currents, which are the main conduit of Earth's heat energy.  Hopefully, it is just a minor cycle, and not the big one. 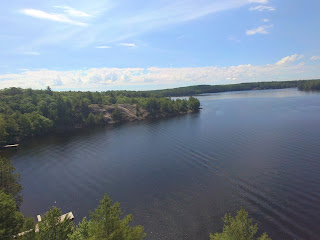 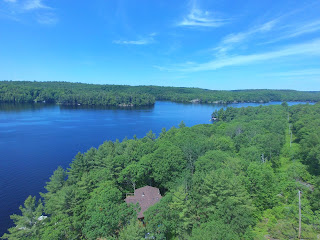 Posted by Harold Asmis at 8:03 AM No comments:

We continue to have paradise at the lake.  The deerflies haven't quite got their act together, and only a couple of horseflies.  We, the hard core, take all that in stride.

This is sunset on the cliff.  It sometimes gets really red, but that's when the mossies come out.  Now it's a bit pink.

Right now it is super-hot on the deck.  Soon I'll go on my one second dip, but the water is full of pine pollen and it gives me itchy splotches.  Yuck.

Posted by Harold Asmis at 11:46 AM No comments: 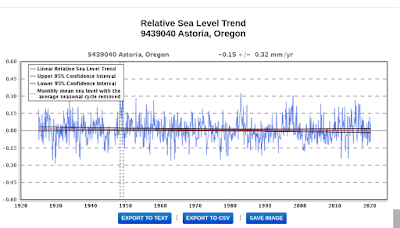 This is the most stable tide gauge I found.  At the gauges, sea level is mostly a matter of what the coast is doing.  Some are rising, some sinking.  This gauge mirrors all the known warming and cooling spells.  As with the satellite temperatures, it is showing a static fuzz.
We've seen in previous science papers that Antarctica and Greenland are not melting.  Sea level rise is totally due to the temperature, just like a liquid thermometer.
Posted by Harold Asmis at 10:57 AM No comments:

Yeah, we are going into another little heat wave.  We're staying up at the cottage because you have to take advantage of a little warmth.  The water is still ice-cold and the fishing is dead.  We are going into horsefly and deerfly season.

My bandwidth isn't great here, but I was going to show that there is no warmth from the Pacific and we are getting a thin blast from the Gulf. 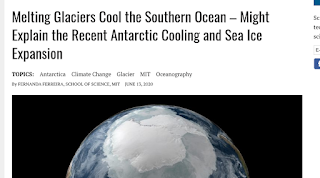 This is great article which says that melting glaciers are causing cooling.  They are greatly confused and stating that something is wrong with the physcis, since the place is cooling and spreading ice.  Neat.

I like to collect articles that state 'Warming is Cooling'.

ps. Tuesday.  A perfect heat wave, no too hot.  The lake is cold, so it is cool at night.  I jumped in for one second.

pps.  a drone video of the glass-smooth lake

Cold air whistling down on us. 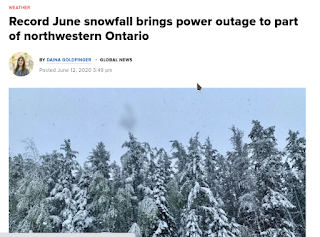 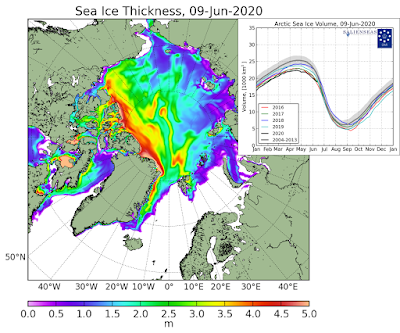 This is exciting.  The black line, which is this year's ice volume, is acting weird.  It is starting to cut through the old curves.  That means we get Arctic weather this weekend, and things stay cold for a while.  It will be fun if it cuts right through everything.

The ice volume was low this year because of a huge Pacific current caused by the Halvsie El Nino. 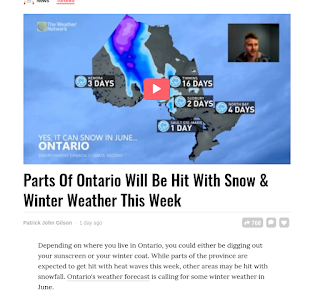 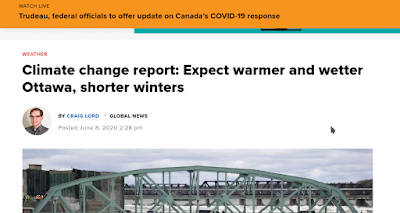 Actually, don't expect any winter at all when designing your trains.  Start a movement: "Defund Snow Plows".  Pay the vet for all-year tick medication.

Enough fun.  Winter will be longer and a lot colder than the last one.  Unless another El Nino pops up, which I doubt greatly.

Still riding off that last mini-el-nino.  The Continental US is still low, but has hooked up a bit for the season, as expected.  Must be trumpypants getting everybody hot.  :)

The Arctic has gone down when it should be rising.  The ice has suddenly stopped melting, and is cutting into the main curve.  We'll see how that goes.

I am expecting a general fall in world temps after the Pacific reversal.  The Indian Ocean reversal should be doing something, but I can't see it.  Maybe it stopping the world temps from diving.  Who knows?


Posted by Harold Asmis at 2:53 PM No comments:

We are having a beautiful Mediterranean day.  Warm, soft breezes, lots of sun.  The dragonflies are patrolling the skies. 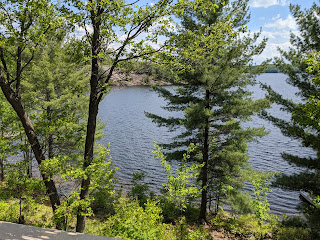 The cold air is coming tonight, with rain.  I went fishing in the nice weather and didn't get anything.  For some reason, the falcons aren't here this year.

ps.  I officially declare fishing dead until bass season at the end of the month.  My super-fisher neighbour is skunked again.

Wow, this is going to be our summer.  Warm air up, cold air down.  One day we have a heat wave, and tons of warmie articles, and the next we freeze, with the warmie press silent.

I have been chastised that I'm not doing much.  But I enjoy the warm days at the cottage, and build a fire in the evening.  The last 20 years we never had a fire to keep warm, and now I'm using up all the firewood.

All my charts are delayed due to covidity.  No physics to bring out from obscurity.

Now, if you want to see what happens when a geophysicist has to keep the party line on warming, read this.  It doesn't make any sense, poor guy, but the PR department needs stuff to keep the rich students pouring in to make the New American Elite.  Working poor need not apply. 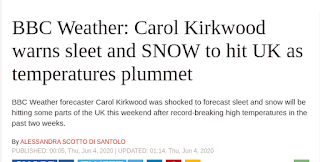 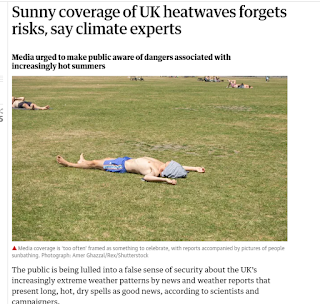 Posted by Harold Asmis at 5:52 PM No comments: