This is my son's Palo Alto start-up, going into the ballistic phase.  You have to ride the exponential with these things, or you die.

It's funny that all the Guardian readers think Palo Alto is evil, throwing everybody out of work, and getting trumpy elected.  While that's true, it's possible to use this technology for a social good.  Landed is reducing the 'friction' between huge foundations, and legitimate people.  This is quite amazing since a huge amount of charity may be distributed inefficiently.  It's quite difficult to dribble out billions in a meaningful manner.

This company could never have started in Toronto, New York, or London.  No social good comes out of those places.  All the money is tied up by the sons of rich men and they just waste it on housing bubbles and such.

ps.  the whole thing can't work in Canada because the constraint is monthly payments.  In the US, the mortgage payment is a full write-off.  So the down payment is the constraint.
Posted by Harold Asmis at 1:16 PM No comments:

My prediction of a nasty winter is finally coming in.  I was quite amazed that the cold air brought out Atlantic hurricanes which warmed everything up in October.  Normally, the Atlantic heat lasts longer but it all went in one big glob.  Now you can see that everything is just spinning.  No heat is going to Europe.

During the summer, this spinning brought up African heat.  That gave them a very hot summer, and further support that the Earth is melting.  In a few days, we'll see the Arctic ice plot, and it will be quite an increase in ice volume.  No heat has gone over the Arctic in the past few months.


Posted by Harold Asmis at 7:06 AM No comments:

Bottom drops out of natural gas 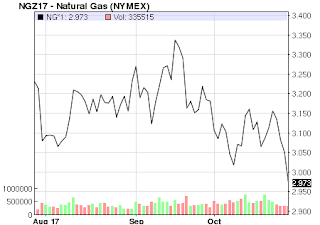 I just follow this because it correlates with Oklahoma earthquakes.  No more earthquakes for this year.  I just can't believe this.  However, a very cold winter has two effects: freezing up new gas fracking for longer, and using up the supplies.  Since I expect a cold winter, we'll see the prices and the earthquakes back up in the Spring.
Posted by Harold Asmis at 9:24 AM No comments:

It's all done and working.


Posted by Harold Asmis at 1:50 PM No comments:

This is very interesting.  NOAA, that champion of radiation heat loss, is predicting a mild winter for us.  I, on the other hand, champion of clear air convection, am predicting a very cold winter.  I was poleaxed for a while this Fall, with the unusual dumping of Atlantic heat, but that has run out.

Basically, all our moist air, with the highest heat energy, comes from either the Pacific or Atlantic belts of very warm water.  The Pacific is dead for now, and the Atlantic dumps everything every year in the form of hurricanes.  The Pacific dumps heat mostly through major ocean currents, and El Nino is a massive heat loss.

So, the physics leads one to the conclusion that there is no heat for us.  This is probably a decade of cold, like the 70's.  Expect frozen pipes for the next few years, as the Pacific heat builds up again.

This is the pattern we had for our whole miserable summer.  In the Fall we had a lot of warm air coming up from the Atlantic, as well as a bit of straight Western air.  I loved the 70's cold when I was young.  I went up winter camping a lot and it was always 40 below up near Huntsville.  Hasn't been like that since.


Posted by Harold Asmis at 7:20 AM No comments:

The poor British.  No hope to get their children on tech.  In Canada, it's always the children of immigrants who bring in the big bucks on pure tech or science.  For some reason, well established children just accept the tech around them and become bankers or lawyers.  I wish I could come up with the fundamental force here (physics), but I can't.

It's bit like the wealth rule:  man becomes wealthy from nothing.  His kids grew up poor, and continue the empire.  Their kids just piss it all down the drain.  An entire country like Japan can become locked in this cycle.  A lot of immigration is the only way to break it.

Now, Britain will brexitize and become locked in.  Too bad.
Posted by Harold Asmis at 7:07 AM No comments: 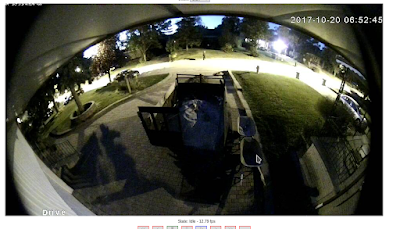 I now have the camera working with Zoneminder.  I am extremely happy with it, since it is a very economical setup.  I had to use the powered ethernet right into the house for a proper bandwidth.  It's such a fun thing to watch in the morning, and you can zoom through quite fast.  The raccoon went by a couple of times.  I can't wait to catch the coyotes after the raccoon.  When those big monsters wander by, I'll finally have something.  :)

This is a starlight camera, so you can see that it's very dark out, but you have a good picture.  I got the high resolution model, and it comes down at 25 fps.  When the next Mafia lord gets wasted, I'll have a fuzzy picture of the car.


Posted by Harold Asmis at 6:59 AM No comments:

Getting Ready for Canadabis Day -- Part 1

Next year, on July 1, what are you going to have in your hands?  Well, if you don't start now, it will be a pathetic beer.  This series is about me getting my hydroponic system going again.  This year, I'll just be growing microgreens, like beans and sunflowers.  I'm publishing to the world, and that's all I'm going to say.  On the Big Day, I'll be able to say more.

Official Word:  Every one of my attempts to grow canadabis has ended in failure.

ps.  Actually, I can't imagine continuing the series.  The friends up the road, who were hard-core thc users, like the 50-50 blend, but nobody else I know wants to try anything.  Canada could take over the world next year, but I don't think anybody is that enthusiastic.  :)
Posted by Harold Asmis at 2:53 PM No comments:

I have one machine that always has the latest -- 'testing' from Debian, and modern kernels.  It always blows up, but I can't live without being on the edge.  :)  So, this machine decided to stop printing on my very old laser printer that only has a 32 bit driver.  No prob, I'll just reinstall.

Little did I know that it decided to mix up my drive order 'sda, sdb, and sdc'.  So when I was formatting the usb install disk, I formatted my other hard drive.  All my media stuff gone!

To top that, I had tons of trouble this time reinstalling, and still the printer didn't work.  Poops!  But I learned a lot of stuff I didn't really want to learn.  The guts of these computers are amazing.... blah.
Posted by Harold Asmis at 6:08 PM No comments:

My favourite old company in the news

Good old Hydro, can't estimate themselves out of a paper bag.  Although this article makes the contractors look good, they are as thick as a board.  I truly think they can't do this whole refurb thing.  When I was involved I kept warning them that the physics was wrong.

You can get away with bad physics if you are pushing a grand political movement like warming, but you can't build a nuclear plant.  At the beginning, we had people who understood this.  Now, everybody is a politician.  Normally, they could actually do it at 10 times the cost, but I think this is hopeless.  Have fun, people!


Posted by Harold Asmis at 5:17 PM No comments:

There is a perfect correlation between natgas futures and OK earthquakes.  This ends during freeze-up which is from January to May.  The physics that drives this, is the fact that they decide whether to frack another well, based on the 3 month futures.  All that frack water gets injected in OK. 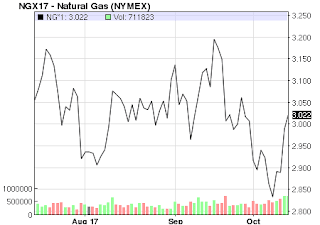 We're starting to see more m4's, which they call m3's.  Had we maintained the Spring rates of earthquakes and natgas fracking, we would have had some m6's by now.  I don't know whether this surge can do it.  Trumpie will probably say something, and the price goes down.  :)

I really wanted a big trumpy earthquake, but the US has had enough disasters for now.  Maybe next year, if he doesn't get booted out by then.  :)
Posted by Harold Asmis at 9:09 AM No comments:

NASA finally confirms that 2016 El Nino was the biggest ever

It did quite a number to the planet.  But the warmies were saying it wasn't so big. 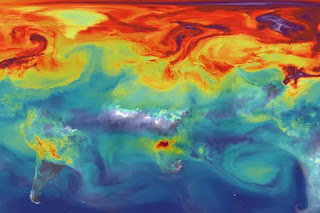 This satellite measures real-time carbon dioxide.  It's interesting, but co2 is only important if you believe that clear air convection doesn't exist.  The downside of the biggest El Nino ever is the same as the downside of the Toronto housing bubble  -- there is a crash.  Get your furnace tuned up.
Posted by Harold Asmis at 7:17 AM No comments:

This remote is really cheap, and does everything you want.  I have 3 devices I need to control, and it does up to 6.  As usual, it only offers Windows programs to fix it up.  However, I found that you can use Virtualbox to do everything.  Just download one of those free MS virtual machines, I used my favourite ie11 and win 8.1.

VB is a bit miserable to get the usb working.  Add your user to the group vboxusers, and make sure there is an empty line at the end of /etc/group.  You then have access to the remote when you plug it in the usb.

It was great for the established brands, but my no-name super cheap Android tv box had problems.  Just pick OTT tv box, mxq pro, and 'learn' the commands from your dedicated remote.  The whole thing was an afternoon, but now everything works.


Posted by Harold Asmis at 6:17 PM No comments:

These are the monthly charts that I wait for and publish.  First, the surprising one. 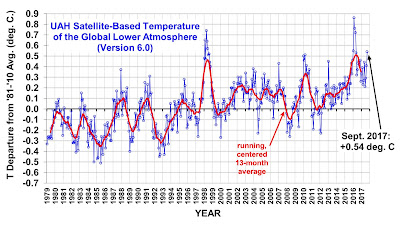 Our lovely warm September has actually shown up in the global chart.  This was a huge event, then, with all those hurricanes pumping up the heat from the Atlantic belt.  Problem is, that this is like one tenth of the Pacific heat, so next month might fall more.  Monster hurricanes are 'heat volcanoes' where they practically boil the ocean with extremely low pressure in the eye.  The Atlantic always dumps all its heat with hurricanes before every winter.  The Pacific stores for its El Nino cycle.

But the Arctic ice volume knows this is a short-term event.  It has plunged into the main record, the biggest come-back ever. 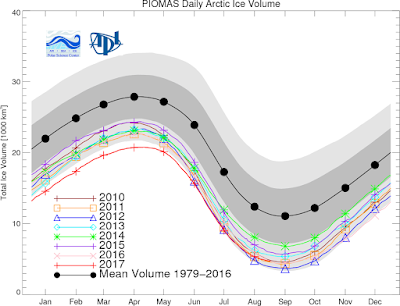 Finally, we show the Toronto housing charts.  EVERYBODY BUY, IT'S GOING UP! 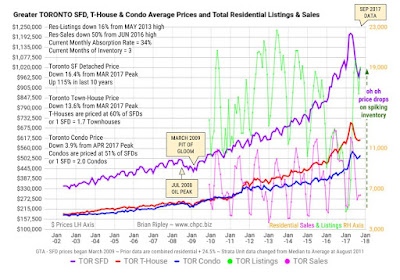 This is a happy chart, and I'm not going to be gloomy.  It has nothing to do with the fact that everybody took away listings last month.  Now, everybody will flood with listings.

I have a crazy Turkish guy who checks my site every 5 minutes to see if I wrote anything.  Maybe it's link spam, who knows?  I am enjoying the last two days of staining before the freeze-up.  We'll close on the long weekend.  This is going to be a real winter.  All my warmie friends will be shocked.  I finally found some real physics that shows convection transfers heat energy at 5 times the rate of radiation.  Those pathetic warmies.
OK earthquakes are going at about a 5 per week.  This will give the trumpies another disaster. 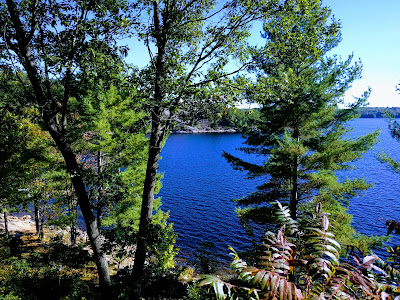 Posted by Harold Asmis at 2:54 PM No comments: