Here I am, sitting on the cottage deck, watching the huge waves from a SW wintery wind.  The water is still bearable because of last week's heat wave.  Yes, we have lost 10 years of warming!  Can't wait to see those global temp curves start dipping down.  What are they going to say then?  That the oceans are air conditioners?  However, I really wish their religion were true, so I could be warmer.  :)

We got our power back after a week.  Nice to have a cold beer.  The bald eagle is back, but it is too windy for it to sun its wings on the hydro pole.  That is so neat!

Posted by Harold Asmis at 4:13 PM No comments:

Yeah for the public hearing!  This will follow the usual format for these hearings:

All sorts of half-truths

Greenpeace chains itself to the smooth legs of a portable table


Posted by Harold Asmis at 6:43 AM No comments:

Oklahoma still spitting out the earthquakes 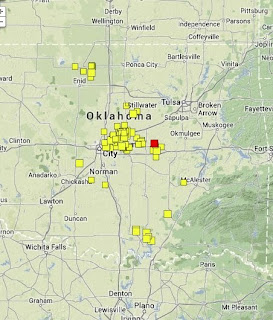 M3.2 right on the aftershock zone of their big one.  There is something really funny going on here, but we won't find out until they improve the seismic monitoring.  Since it looks so quiet now, we can probably expect another cluster of 3's soon.  Good depth determination might show a dipping fault. 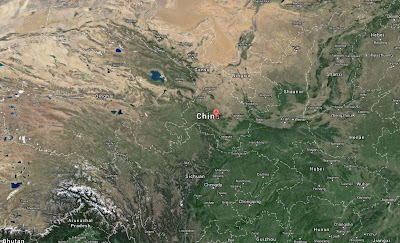 There can't be an earthquake in China without somebody getting killed.  You can see that this earthquake is in the zone of compression from the 'Big Crunch' of the Himalayas.  This was a shallow thrust in farmland.  It could most likely be a 'superthrust', but they will probably find the high-intensity zone out in the country.  They should look for thrown rocks.  Most of the pictures didn't seem to indicate a high PGV.


Posted by Harold Asmis at 7:38 AM No comments:

There has been a very interesting earthquake cluster in NZ, with the biggest so far being an M6.5.  Up to now, these earthquakes are considered small for the tectonics, even though there has been some damage. 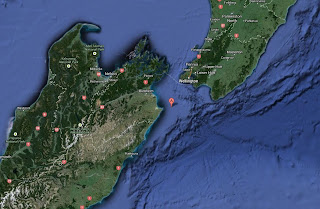 To the north is the land of big volcanoes, the plate is converging at more than 4 cm per year, which is a good clip as far as plates go. 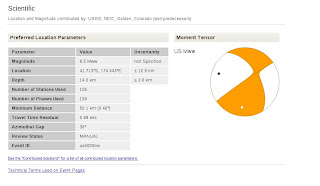 These earthquakes are messed up because it is a transition zone between the subduction to the north and the transform fault to the south.  I have a strong feeling that the M6.5 is probably as big as they get right here, due to the general mix-up. 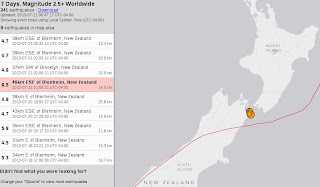 This is the recent series.


Posted by Harold Asmis at 7:00 AM No comments:

On Friday, the marina boathouses were mushed to splinters.  There's really no fund, but generous rich people can contact the marina directly.  I'm sure you get a unique Anstruther Lake t-shirt for every thousand donated.  :)

Wow, that Friday was something on the lake.  First the SW winds were building to a very high level, and it was so hot!  I have my sun shelter on the dock, and it was flexing.  "It's gonna make it!"  I kept saying.  The winds kept increasing with gusts of 80 km/hr.  Finally, the steel collapsed, and I quickly took it down.  A little while later the windsurfer board picked up off the dock, and took out my little solar light.  I took everything off the dock.

That was only preliminary.  I had checked the radar, and there was this most brightly coloured band coming towards us.  I could then see it from the dock as solid black.  Sound the tornado sirens!  We sat on the porch in the breezeway and admired the view.  First, solid winds came, drove the waves up to 3 feet, and then sheared off all the whitecaps in this big rolling mist.  Luckily the wind had changed direction to more westerly, which we are sheltered from.  Then the big wind came and it was a giant vortex.  We ran inside, and yanked the crazy wife away from the windows.  It became all solid white.

La, la, we emerged all fine and dandy, but with no power.   I took in all the solar lights for the night, and we cooked on the bbq.  The next day we heard the power situation was generally hopeless, and the marina was trashed.  My daughter volunteered to clean up trees for the morning.  Saturday evening we decided to get out of Dodge.

The marina boathouses were trashed at the ends and most of the fabric roofs were shredded.  It was funny that our poor boathouse at the farthest distance was totally untouched.  We were always considered the slum section.  :)   Ha Ha!

The Hydro crew was there putting up new poles.  There was one section where a 100 foot tornado had cut through.  The trees were totally destroyed!  We didn't see much damage the rest of the way home.

Now we just have to see if they get the power up tomorrow like they said, so we can save the frozen meat.

Update:  No hope for any power there, so I had to zoom up today and rescue the food.

Update3:  Power to the marina, but no power yet to our cottage.  Lots of hydro crews.  We were the worst hit in Ontario.
Posted by Harold Asmis at 8:43 PM No comments:

I can usually tell if there is an earthquake by looking at my blog stats.  This time there is a huge blip. 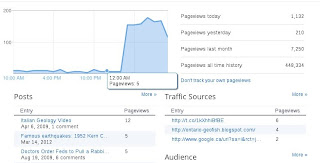 This is waaayy beyond my usual spam attacks.  Two things, either my Facebook lady finally published my article, or people are crazy about this Memphis earthquake. 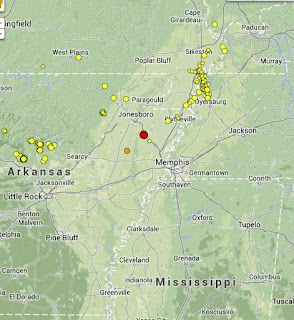 I always like this type of earthquake since it is on the margins of the New Madrid zone.  We must always wonder if this zone can grow again.  There has been lots of activity on the central thrust zone, but it has never expanded.  This activity must be matched on the shear wings.  A good earthquake for Memphis would be an M6 that lengthens the lower shear wing.  But it's not going to happen tomorrow.

Update:  Looking at the 'Now' stats, it is definitely a spam attack gone bad.

Posted by Harold Asmis at 9:50 AM No comments:

So I bought an APC 550 UPS at the Peterborough Costco.  Maybe they hardly go through them, and they're years old.  This thing has a lead-acid battery, and those things have to be topped up once in a while.  This equipment should have a 'best before' date!

It didn't charge.  I couldn't get the voltage past 7 V.   I originally followed the instructions, and it lasted 2 days before the dreaded 'double beep'.  This is all over the Internet, and I followed the reset instructions and it didn't work.  I'm just taking it back to Costco, since the APC support doesn't sound good, and who wants to wait for a battery?  One guy on the Internet had successive failures on returns from the same store, so I guess a whole batch can go bad.  I'll try a different Costco.

Update:  I went back to Costco and got a new one way in the back with the new labelling.  The voltage was 12.7 V.  I ran apcupsd which is the Linux daemon to monitor it, and everything is perfect.  I ran some power tests and it works.  You've got to note that only one half of the plugs are battery backed up. (Duh!!)

The unit is one year old, so these things are good for at least a year.  I wish I could have tested the old one, probably years old.

Check the voltage on the battery right away.  If below 12V take it back.

Run a utility if you can.

Update2:  The official shelf life of these things is 9 months, so a year is pushing it.  If it has maintained a voltage above 12V it is probably not damaged.
Posted by Harold Asmis at 8:42 AM No comments:

Glorious hot, sunny weekend, the type where you don't fish much, and don't catch anything.  The water is now really warm, and the icy thermocline is at 8 feet.  It'll get down to 20 feet soon.

Only 2 falcons left.  We've been having a new bird that we thought was a raven, but now that I've looked at it closely, I think it is an immature bald eagle, all dark with a white eagle beak.  It likes to sit on the highest hydro pole and fully open it's wings for a long time.  It looks just like the top of a totem pole!

Update:  I think all these raptors can live on the wild turkeys.  Saw a mother on the road with 10 babies!
Posted by Harold Asmis at 9:44 PM No comments:

So, all you people in your 70 story condos.  Was it getting a little warm climbing up those stairs?  Or are you like one person, 35 floors up, barely outside the power loss zone, saying "Hah, Hah, what storm?"  Does he ignore something?

Our power is hanging by a thread even when Manby station is finally pumped out.  So here is my prediction:

Our M5.5 earthquake, at 1 in 100 (maybe 1 in 200), will produce a massive power outage for all the condos for a long time.  Why, because all the old shit will break, and we have no reserve.  Perhaps we could have had a gas power station in Oakville, but nope.

All our nuclear stations will shut down.  And that sucks, because it takes full power from the grid to start one up.  Catch 22.

Went alone for 2 days with the dog.  Had to get away from the 'funemployed' kids.  Favourite words:  "Why don't you do it?"  Very nice weather, no big fish.  While fishing saw that we have 3-4 Peregrine falcons just out of the nest.  Diving and fighting, and screaming for Mommy.  Look nice in their Kiss makeup.  Here, I'll pretend I took a picture: 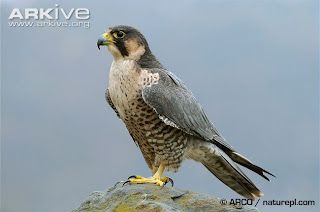 I'm really good, huh?  They kicked out the ravens, who are mad.  Anyway, no seagulls!  The wood ducks better look up, and the loons can take care of themselves.  Boy, are those falcons fast.

Saw 2 young bears on the cottage road.  That's why I go fairly slow.  I think Big Bro would be mad if I hit Little Sis!


Posted by Harold Asmis at 1:03 PM No comments:

Happy Ford wants to review this.  Here is my open letter:

PULEESE, have a drag, and throw in earthquakes.

Well, 126 mm in 2 hours!  I got off lightly but my backyard was a river.  Yeah for surface grading!  We had the power off all night.
Posted by Harold Asmis at 12:58 PM No comments:

Very hot the last couple of days.  The water is finally a tiny bit warmer for the top 3 feet.  Dip your toe lower and you feel it.  Don't swim where you just disturbed the water!

Last weekend the fishing-mad neighbour caught this huge pickerel off his dock.  Man is that an ugly fish!  We got a couple of fillets, and the taste is superb!  Later, I caught a large large-mouth bass, and that is quite a tasty fish, as well.

This is the time of the deer and horse flies.  Sometimes on the dock, you just go whap-whap-whap, and the little fish go crazy snapping up the dead flies.  The blueberries have just started.  Hopefully, we'll get some more rain to keep them going.


Posted by Harold Asmis at 6:53 PM No comments: