Temperatures down, stagflation up -- welcome to the 70's show 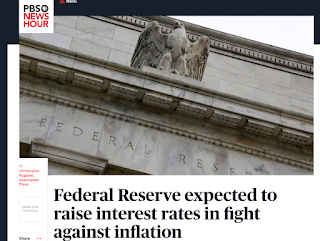 Canada must dance with the elephant or get stomped.  This is reality.

Central bankers want to be seen to be doing something.  That works both ways.  For the past few years, there have been few attempts to raise interest rates to normal levels.  It doesn't do anybody any good to keep interest rates at zero, or negative, for a long time.  This is a distortion in how an economy works.

However, each time there was a hint of raising interest rates, the economy (stock market) tanked, causing presidents to threaten to put the bankers in jail.  Governments continued to effectively print money.  It worked great, as long as everybody in the world was doing it.

The price of Bread and Circuses stayed down, and this is what the bankers measured.  They ignored asset inflation.  So, money was worthless, let's put all our money into bitscoin and Toronto luxury condos.  The gov't went into magnificent debt, and that didn't matter because everybody was doing it.

We have lived in the era of Group-Think.  Everybody did what everybody did.

Group-think can only end with disaster.  Think of the space shuttle blowing up a few times, and what nasa had to do to recover from that, like it never happened.

Much like the doctors (and nasa) everybody is going to try to double down on their group-think.  How about a vaccine passport for 10 boosters?  How about a full head KN99 mask?  And time to raise the interest rates.  Damn the torpedoes and full speed ahead.

So the brakes are off, and interest rates will be punitive.  Yeah for 20%!  There's no limit now, because they don't care about the stock market or the economy.

The truckers are showing the strikes of the 70's.  They should be stopped at the Ontario border and told to walk.  Yeah!  I'm sure there are safety violations in there somewhere.

ps.  stock market jitters may prevent the interest rates from ever rising.  Then we just have 20% inflation.  The purpose of the rate hikes is to quell the populace from striking.  Neat.