The reason I made the blog invisible is to just have a private journal.  Nobody reads about ocean currents, but every 5 days, we get a new summary from the Argo floats.  Also, nobody else is keeping a record on how this changes, especially in our world of 'declarative science'.

This is the Greenland zone.  The flat field of current has rotated and is now feeding into the Greenland current, which is huge.  The effect on North Atlantic heat energy is the same - there is none.

The Pacific belt is totally disorganized, and I've never seen it like this.  This is much more than 'La Nina', but who wants to open that can of physics worms? 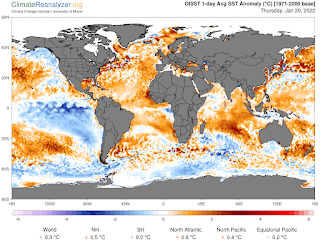 You can't believe the sea surface temp anomaly.  It's unbelievable! It'll take 20 years to fix it again, and the weather people can say 'La Nina has stuck around for 20 years because of clange, and we predicted it all along.'.  Makes for great tv.