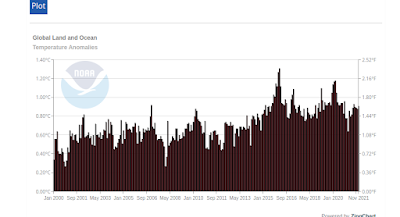 This is the end of the year and nasa has a problem.  They are addicted to this weird annual plot where they do something to make it look better.  But we are declining since 2016.  What are they going to do?

You can't go public and say that world temperatures are going down.  The phillies will kill you with their definitions of 'world' and 'down'.  Such fun.

The latest thing is to say that the oceans are warming, with poor definitions of what they mean.  This is in all the media right now.

And for my investor buddies, natgas looks better than bitscoin right now.  I expect it to zoom.  It'll be much colder than the phillies expect. 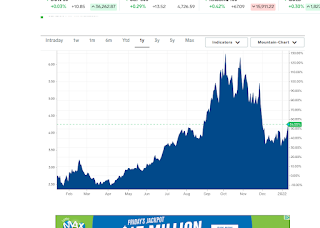 I think you will be right on the natural gas. It seems though that it is better to buy a house. There is inflation and than there is asset inflation.

No house right now. See what the expectation for interest rates is. US is at 7% inflation. This is the 70's. We expect interest rates at 20%. We need to shake the speculators out with high heating costs and high interest rates.

I don't think they can raise interest rates. But with food and rising fuel costs will make it interesting. I am a believer that they can't get rid of their balance sheet roll off.Interesting times with the climate cooling at what I call at a quickened pace.

I also just came across this Ventusky weather site.This site is telling me we are in for some cold if it is accurate.

Interest rates are going up fo shure. However, I've advised not buying a house since 2007. If the US raises interest rates, we have to copy.

I am willing to put a beer on the interest rate not going up. We can't afford it.

Ha, if the savage interest rates come in, nobody can afford that beer. :)

Us old guys will have some money for beer. The youngins not so much.