Nasa doubles down on carbon warming 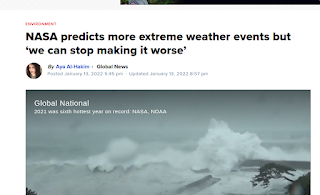 In an interview with Global News’ Jackson Proskow, Gavin Schmidt, Director of NASA’s Goddard Institute for Space Studies said that the world has reached a plateau of warming that’s actually part of an ongoing continued warming. This is because of the increases in greenhouse gases, notably carbon dioxide and methane, he said.

I especially like this phillie-logic statement.  It is magnificent.  The flat section of the global temps has been expected, and is actually part of carbon warming (for some reason).  They'll be even happier when it starts going down.  'The global temps are going down to an ice age, and this is all part of the original philisophical concept."  (I made that up). (history can be rewritten)

Instead, they are going on and on about extremes, which are really caused by having no tropical plumes, or ocean breezes.  Since I expect a lot of extremes with the new ice cycle, they can go on forever, with this.  Also, all the weather people are saying that the cold is expected 'with a La Nina year'.  (That's our big 'polar vortex' guy).

They don't say that the Pacific belt has been cold for years, and getting colder.  They can't rate La Ninas or El Ninos.  The term (El Nino) was coined by fishermen in Chile, when the anchovies went away for a year, every seven years.  La Nina came the next year, and only lasted a year.  Then back to normal for 7 years.  That cycle is gone.

As I predicted, we are now getting into the 'ridiculous' phase of climate apologetics.

ps.  natgas has tucked in a bit, because of the storage report, which obviously suggested there was a lot of stored gas for the phillie weather forecast. 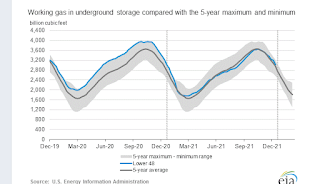 Storage is exactly where it should be, but storage can only drawn down at a maximum rate, so it can't suddenly dive (constrained).  I don't why this made everybody happy.  I just realized it's not that the storage empties, but that the demand gets above draw-down.  As the space heaters blow up, everybody gathers around the gas stove.  What could go wrong?