No graphite is another nail for electric cars 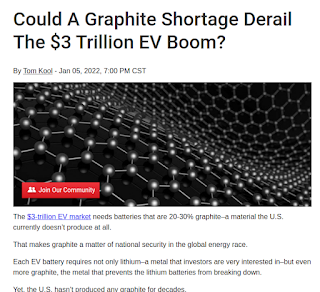 With the new ice age, we have telsies frozen to the ground in Sask.  We already have mrmusk making unholy deals with the slavers for lithium.  And now, this is new --- no graphite!  Graphene is the new wonder material for the electrodes in batteries.  The anodes and cathodes must swell like balloons, chock full of lithium, in order for a battery to work.  This is hard-core physics, you can't talk your way around it.  Unfortunately, the slavers have all the graphite and lithium.

The big thing for EV's is volume.  All the big car makers say they are going to bury telsa in volume.  Ha!  Mrmusk produces a million or two defective cars, and the world produces 100 million (before covid). When every super-expensive car on my street (it's ridiculous) is electric, then we can talk about all the electrical wires melting.

When the press starts talking about the ice age, and quietly brushing carbon warming under the carpet, then we'll start building methanol cars with super-capacitors.  Hopefully, no lithium or graphite involved.

**note that all names have been mungled to protect me, and keep my readership as low as an Alberta morning.

*** this site is all satire (physics, the same thing) and has no place in modern philosophy.  My 9 readers know that.

ps.  physics (satire) has now been banned from the comments of all major declining media outlets.

pps.  famous phrase 'I think about it, therefore it is real'.  Enjoy the physics while you can because I feel a total world ban on physics coming up.

Stop telling the truth. It's going to get you in trouble.

I just have to be more obscure.

Harold
I reposted you on investorvillage.
I found your blog on newsnow.
There's way more than viewers.
Joe

It's a matter of philosophy that I only have 9 viewers. It's a love/hate thing with those numbers. Sometimes I despair with only 9, but I put that out as a shield. No famous phillie would attack or sue when their shadow of influence would boost me to millions. :) I can just wait for their group-think to freeze to death. They can join Toronto housing speculators.