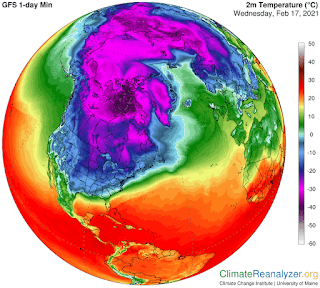 I've decided to name the cold blobs, since everybody does that.  The UK names its storms which are really just tropical plumes, so I can name blobs.

The first blob that is now making a permanent home in Texas shall be named Al.  This one is Bob.  They are short names because blobs have no energy.  Blobs are born because the polar vortex fairies have too much fun, and blobs are unwanted, so they are sent away.

If you want physics, then blobs are born when all heat energy goes up to outer space.  At 50 below, Bob starts to form as a distinct entity.  The air at 50 below is extremely dense for air, and is what I've been calling an ice lock.  Bob becomes an 'air glacier' which drifts down south, looking for heat energy to consume.  Bob is more to the east than Al, and will become 'The Blob That Ate New York'.

The physical properties of an air glacier are amazing.  Our atmosphere has two key (magic) temperatures: 30C for the tropics when the air becomes so convective it forms a tropical plume, and 50 below where the air becomes the densest beast on earth.  The air glacier moves simply because the air pressure at the front is less than at the back.  No tropical plume can break up the blob.

Texas and southern states don't dry their natgas as much as we Canadians do, so the ice crystals gum up everything.  We are used to 50 below from the 70's and that experience has not been totally wiped away by the warm cycle.  I can't wait until 'Bob Goes to Washington'. 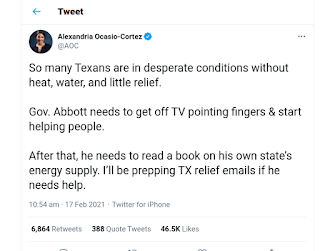 Yesterday was a big snow dump and today is frigid.
Fortunately we got a new furnace a couple of weeks ago- might of been a god send!

Yeah for new furnaces! My multi-speed is great. When Blob Bob hits us, then furnaces are good.

Don't forget a some storms need a woman's name
Blob Bob is good. How about Chilly Milly?
Or is that too sexist? Perhaps I'm being a misogynist? Can a woman be a misogynist?
LOL

I knew you would say that! I was dying whether a female name would get me into trouble. All sorts of 'frigid' jokes, 'ice queen', 'cold as a witches ...' All those things led me to the fact that there can't be more than 2 or 3 per winter.