Tiptoe through the nasa tulips 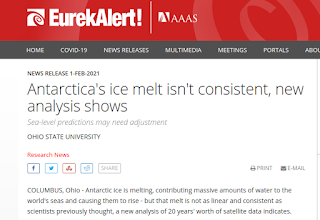 They are saying the irregularities of ice melt should be reflected in sea level changes, but they don't do that, which would have been 5 minutes more work.  That's because they are funded by nasa, the only geophysics funding in the world.

"I'm not saying Antarctica's ice melt is not an acute problem - it is still very acute," Wang said. "All of Antarctica is losing mass, very rapidly. It's just a time scale problem and a rate problem, and our models that predict sea-level change should reflect that."

That's what all the geophysics papers put on the end.  Translation:  "Although these studies show nasa is full of crap, we can't say that.'

But she has bravely put out a hypothesis, which is the first in 50 years.  -- The fine detail in the gravity measurements should be reflected as fine detail in sea level changes.'  Magnificent!

But it doesn't.  The fine detail reflects world temperatures, and the satellite temperatures of Antarctic have remained steady as a rock.  There is no mass loss.  Gravity studies could not define it.  Wonderful.

ps.  the news is filled with 'ice melting' stories now.  I can't find the source.  Meanwhile, the Arctic is going full blast. 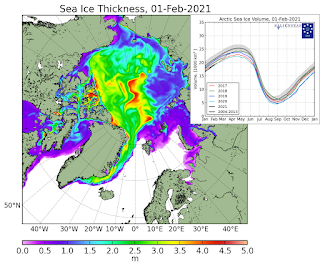 It is no longer the worst, and once those islands are encased in ice, it is the classic start of a little ice age.

How long does it take to get to ontario when the currents hit the armpit of Alaska.

A strong hit on the armpit is about a week to Toronto.

I saw that article about the antarctic ice melt being not as claimed
and I thought about words. And how they are used.
It's a tad warmer today, but, not terrific.