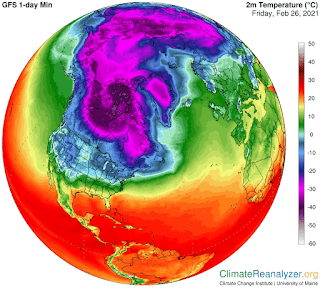 Yeah, I won't be attacked for knowing too much.  All my kids are laughing at me -- "Where's the cold, dad?'  Blah.  Once again, the blob has been sheared off by tropical plume winds.

I took a guess as to the physics, and it looks like it's not the tank I thought it was.  It's brooding up there, and we all want to know if it is going to take another stab at Texas.  I also think the Great Lakes had more heat energy than I thought.

ps.  we start to get a better idea of the actual physics parameters.  It actually is a 'slime mold' that eats heat energy.  It would have properties of cohesion, adhesion, stiffness, etc.  Two times it has attempted to go down the Great Lakes and has failed.  The last time it had to send a narrow tongue down alongside Lake Superior and that was too weak.  Now, it is in a tight formation and that can deflect plume winds.  Will it advance again?  Most likely, and it will go to Texas.  At least, nothing will freeze in the garage.

Our 'bellweather' site is Fort Mac 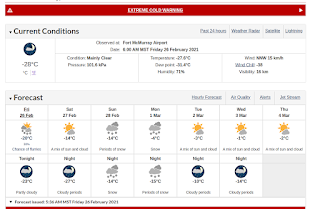 Yellowknife is all -40 across the board.  Tomorrow, it will be the same here, if it starts to move.

pps.  the tropical plumes are funneling down a Pacific heat zone and hitting us.  Any blob must be robust to survive. 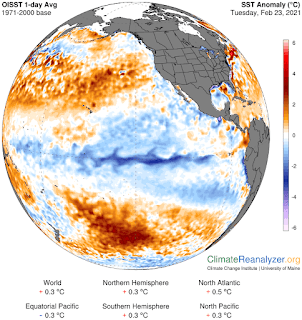 Weather forecasts are from