I had declared La Nina to be dead, because the feed started to be warm.  Now there is no heat at all in the Pacific. 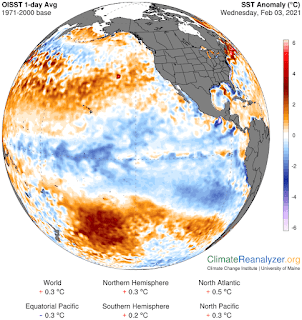 On the far edge of the anomaly map you can see that the Gulf Stream along the US coast is stone cold, but the currents aren't showing anything.  This is because of the huge resolution difference between the currents, and the satellite. 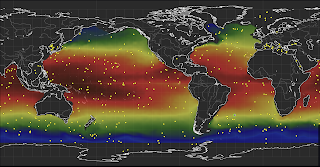 These are the current positions of the Argo floaters.  They drift and the positional difference is used to calculate the ocean currents.  In the areas of the Pacific current feed and the Gulf Stream, they are widely spaced.  Darn.

So, the conclusion is that I don't have a conclusion.  La Nina has gone to a different mechanism of cold.

All I can say is that we need more physics.  :)

And that's where you come in to the picture!

Ha, ha. but no. I can't add the physics required for the Scientific Method. I can only grouse about it, because physics needs money. :)