Cold Blob2 may be starting

Bob the Blob relocated, maybe to the point where we can't call him Bob anymore. 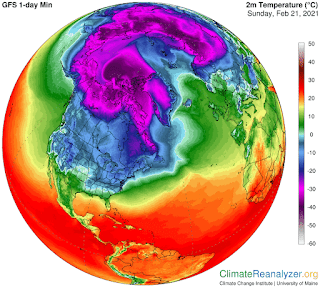 He's trying to sag, but there is a huge tropical plume eating at him

If he is really going, then by tomorrow we'll have a bigger sag, and the tropical plume will be deflected by 'Blob Power'.  There's no plume after this one.  Blob1 had this same pattern.

The sequence will be that Alberta enjoys 50 below, then down to Texas.

ps.  the narrative, without physics, is that the jet stream is very strong right now and holding Bob back.