50 Below Glacier Creeps Down

Ha, not an ice glacier, but a cold air mass that behaves almost the same. 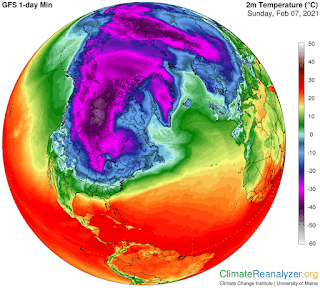 That air is incredibly thick, like ice.  Nothing can penetrate, not even tropical plumes from the Atlantic.

Slowly it comes down, and is stopped by the Great Lakes.  They are right now pouring out a tremendous amount of heat energy as they freeze.  But the mass of zero energy air just sucks it up and moves down.

Such drama!  I'm writing a fantasy with a good physics engine.  :)  Can't wait for the next headlines:

ps. and you can see that the black zone is well below average, but the east coast is happy. 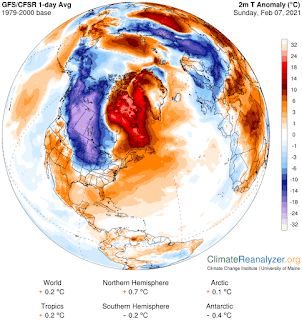 pps.  and it looks like another huge east coast snow storm coming up, caused by climate change.

It's the same pattern as before, warm moist air meets a wall of ice-air.  It goes boom. 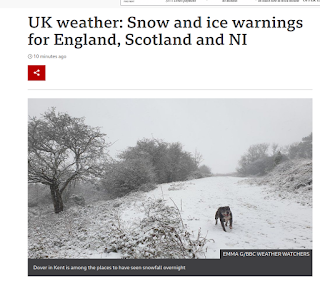 wow that is a serious cold air glacier
I see how the lakes are kind of keeping it at bay... for now
It's freezing again- seriously below "average"
and it's snowing and snowing.

Here in Spain we're being whacked by hot, then cold, then hot. Example:middle of January it was -25.4c (daytime) then 2 weeks later +29.6c. It was an all time record. Deep snow then sweaty bollocks weather etc. Now it is cold again and in 2 days its due to be toasty again. Weird.

You are getting hit by the tropical plumes. They are all going south of UK and hitting Spain. Have fun.

Ever heard of that one

I was going with that for a while, but the resolution for the south is not that great. The big question is what happens to the heat energy when there is a great northern ice advance. It generally looks like the south is cold as well, and the south warms up during the northern warm cycles. It's a mystery

I thought you needed a chuckle.