Here's a situation that you want to be temporary.  The Universe is making a joke on the warmies and going to extreme cold.

Why didn't we have any late hurricanes, or major typhoons?  No heat energy.  The only warm air activity on the oceans is that bleeding over South America and Africa. 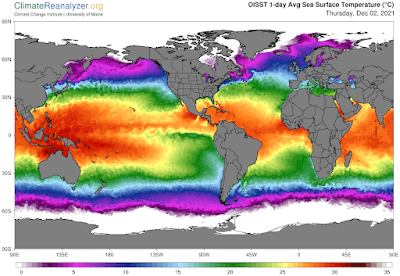 The West Pacific heat engine that gave us nice weather in October and November has been eaten by the cold.  The atmospheric plumes are a shadow of what they once were.

I don't do predictions on climate, that's impossible, but this is big, and would signal a true major ice cycle if it holds.  I'll dig up the indicators of the last Little Ice Age, and do a play-by-play.

ps.  In 2016, both major northern ocean currents dropped dead.  I predicted then that we were in for a lot of cold, and the UK would become Labrador, since the Gulf Stream stopped transporting heat.  It took 5 years to get rid of the residual heat energy in the oceans.  That shows the amount of energy involved, probably 1000 times that of solar flux variation (at 0.1%). 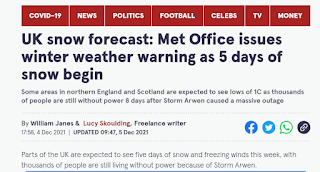 and now they don't have anybody to operate snow ploughs or fix the power.  The army will now have to do all the shit jobs.  :)  Expect resignations.

You can keep warm with happy thoughts.

pps.  The collapse of ocean current and plumes leads to 'extreme weather'.

In 1642, Thomas Gorges wrote that between 1637 and 1645, colonists in Maine, then in Massachusetts, had horrendous weather conditions. In June 1637, it was so hot that European newcomers were dying in the heat, and travellers had to travel at night to stay cool enough. Gorges also wrote that the winter of 1641–1642 was “piercingly Intolerable” and that no Englishman or Native American had ever seen anything like it. He also stated that the Massachusetts Bay had frozen as far as one could see and that horse carriages now roamed where ships used to be. He stated that the summers of 1638 and 1639 were very short, cold, and wet, which compounded food scarcity for a few years. To make matters worse, creatures like caterpillars and pigeons fed on crops and devastated harvests. Every year about which Gorges wrote had unusual weather patterns noted, including high precipitation, drought, and extreme cold or extreme heat. All of them were byproducts of the Little Ice Age.

Yeah, natgas for heating and cooling!