Cold blob is a monster

I call these clairslides, because they act like cold air landslides.  I used to call them air glaciers because of their shape, but they move too fast.

Straight from Alaska, and it's going under the Great Lakes to hit us. 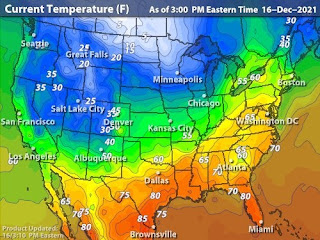 The white is sub-zero F.  I can't get a current map of Canada.

The Alaska shot shows the clarity of the thing.  Normally, 'there can only be one', but there are some babies.

One is going down Greenland and will curve and hit the UK.  The other is coming down from Sweden and should make Germany rethink nuclear power.  :)

ps.  somewhat related to cold, note that the newcovid only gets into the upper air tracts and not the lungs, so it really is a common cold.  The virus is too busy trying to reproduce before the antibodies get it.  So, go to a Christmas party and breathe in the vaccine.  :)  Of course, that's as stupid as a chickenpox party, which is also a great idea, but stupid for the powers.

CONTENT DEACTIVATED I would still wait a day before you press the panic button. This variant is 'super airborne', and that means it goes through the eyes, and gets through masks if you shout. The latest info shows it doesn't reach the lungs, because it's so eager to latch on a reproduce. The next variant will spread even faster and be even less lethal. Are we approaching the common cold? That's because there is no evolutionary pressure to kill people faster. Ok, I retract, and we'll go with the power-doctors to fight this with every restriction we got. They need the money, and we'll fight the next one, too. « less

but I got a few likes in before the hammer hit.

more:  they used to be free to say that all the ICU patients are anti-vaxxers.  Now they don't.