Solar cycle looks good to me

Solar energy flux, or the energy hitting the Earth varies about 0.1% during a normal cycle.  Just my reading of the physics makes me think that the Sun or orbital cycles have no effect on anything.  The energy turnover with the oceans is probably a 1000 times more than any other influence.  That's important to me, since I say that the tail never wags the dog.  However, the phillies can argue it ten ways to Sunday. 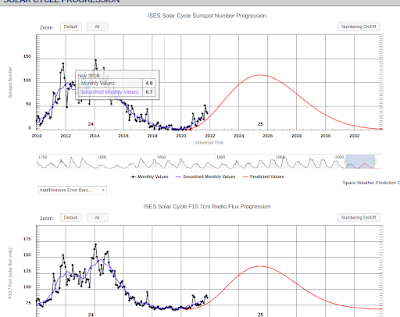 This is the final coffin in the nail for the sunspotters.  We're going up again for a perfectly normal cycle.  We have no physics for the famous minimum that happened in the middle of the Little Ice Age.  It was only noticed that the sunspots were off because they had just invented telescopes.  Might have happened before and we know nothing about the solar flux at that time.  I'll go with ocean currents.  If we could do some physics then we would know.  Now, we're just lip flapping.