I try not to talk too much about temperatures, because that is a fairly meaningless term with physics.  Best to be 'left' to the philosophers, or phillies.  We are warm because the Atlantic has a heck of a lot more heat energy than usual this time of year.

Normally, hurricanes tap off a lot of heat energy, but none of those this year.  The lack of hurricanes is because of clange.  :)

Instead of hurricanes, the Atlantic belt is throwing us tropical plumes.  Normally, we are practically done with the Atlantic by now, but look at the heat in the Gulf!  All the heat looks to last another month.

The West is the 'End of Heat' which would make a good apocalypse movie.  They are living on 'latitude sun energy' which is almost nothing. 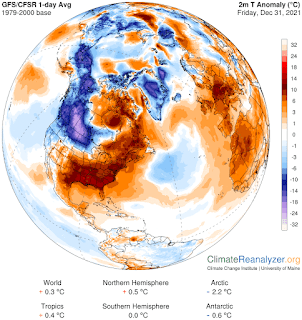 The heat anomaly is an incredible picture.  There's no heat in the Pacific, and we are roasting.  Sooner or later we're out of Atlantic gas.  I don't know when.

ps.  no heat in the west is clange.