RSS is down for November 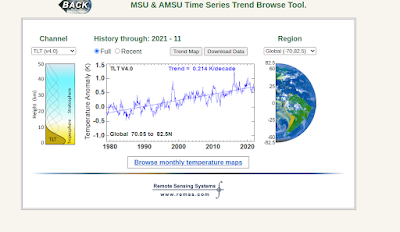 RSS joins Spencer in a downward November.  NOAA will most likely go along with it, since it's all the same technique, mostly.

You can see the little bump of the west Pacific.  It's gone now, and we expect a more severe decline next month.  The continental US is up, but we saw that on the anomaly plots.  That BC river poured over everything.

The plot is generally flat since 2016, but you really can't say that, because they'll debate the heck out of you on the meaning of 'flat'.  That happened to one poor guy, and now he's on the Google naughty list.

I can say that all the physics points to a low in travelling heat energy.  They won't debate that.

I can also say that nasa and the guard are doubling down with the 'climate breakdown' thing.  They couldn't use polar fairies or dancing jet stream any more, since that's just silly.  And the rivers are dry.  So we can say that the UK and Europe are freezing because the 'natural order' of weather and climate has been 'disrupted' by carbon.  They never go back to their original hypothesis anyway.

ps.  they keep piling on new super-powers for carbon.