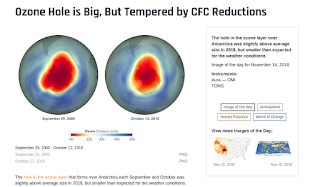 The hole in the ozone layer that forms over Antarctica each September and October was slightly above average size in 2018, but smaller than expected for the weather conditions. Colder-than-average temperatures in the Antarctic stratosphere created ideal conditions for destroying ozone, NASA and NOAA scientists said, but declining levels of ozone-depleting chemicals prevented the hole from growing as large as it might have been 20 years ago.

The satellite temps show nothing is happening in Antarctica, yet they are saying 'colder than usual' while all the press says that the place is melting.

This is the fun of going without physics, you just have to make up more and more stories.

I was inspired to look by this article.

I made a comment, but haven't looked at all the hate yet.  :)

ps.  extreme cold over Antarctica is melting it.  We now move to the North Pole and find that on the coldest day, that the ozone hole is larger than ever.  Formed in extreme cold.  But the Arctic is melting.