Weather misconceptions that led to the whole climate change thing

I'm not denying anything.  The term 'climate change' is as valid as 'Santa Claus' and the 'Gatwick Drone'.  These things all 'exist' because you can't prove they don't.  Without any physics, the carbon hypothesis was set up as a straw dog, and they dared anybody to knock it down.  All attempts, such as sunspots, etc, were fought off.  If you think this is the way to run the world, then I don't deny that you exist.

If you want to use physics, then you must think in terms of energy and mass.  That goes for kinetic and heat energy.  A physical object is something that retains its own mass and energy and can act on other objects, like a hammer.  These are 'things'.

But in weather jargon there are many 'things' that are not objects.  Perhaps they were originally 'concepts' but they became objects over years of use.

The biggest 'thing' that is not a thing, is the Jet Stream.  Here's the typical description:

This causes the polar jet stream to meander north and south instead of making a beeline around the planet. The meandering causes the cold air of the polar vortex to wobble, and, like a toupee that goes askew, it can slip south off of the Arctic over the United States, Europe, or Asia.

It is accompanied by these sorts of pictures. 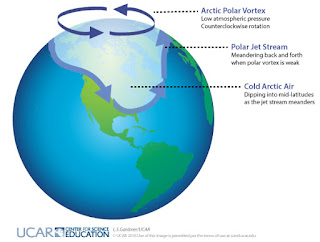 I cannot deny that this article exists.  They have made 'concepts' into objects, but these phony objects have no independent existence, and cannot 'act' on our world.  The jet stream is merely a phenomenon that happens when the cold Arctic air meets the warm mid-latitude air.  It is a thermal vortex on its side, and does not act as a current around the world.

Jet planes can 'sail' a segment of it, like a sailboat going against the wind.

If the Jet Stream doesn't 'exist', then neither does the Polar Vortex.  It cannot be measured or imaged.  Perhaps there is some motion in the upper atmosphere, but the air is thin and cannot carry energy.  It is merely a zone of cold, which the absence of heat energy.

These things are the ghosts of the world.  True energy is carried by ocean currents, and the warm air plumes that come off the ocean heat.  If a big hunk of warm, moist air hits the Arctic then it may bloop out cold air, simply by displacement.

So, this explanation is for Penny.  The next time you read that the Polar Vortex is going to get you, or the Jet Stream is going to slam you, think of the Boogey Man.  I don't deny that he exists either.  :)