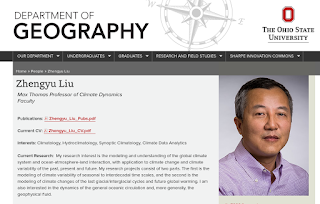 I'm glad I found him, the most important missing link.  He is a climate modeler, taking the straight line and putting into computer models.  These are the people that nail together the whole thing.  All his papers have been on how global warming affects the atmosphere in a feedback loop.

Now, he is the authority on how carbon warming is now affecting the ocean currents.

Liu and Chengfei He, a graduate student in Ohio State's atmospheric science program, analyzed model simulations to illustrate how heat is expected to be transferred by the oceans and atmosphere in the near future. The researchers compared the models with historical temperature data from the oceans themselves to paint a clearer picture of how climate change is shifting and will continue to shift these patterns in this century. Their study appears online today (Jan. 28, 2019) in the journal Nature Climate Change.

This is as good as the weather affecting earthquakes and volcanoes.  I can't wait to see how this argument will play out.  I have predicted they will use this to 'explain' global cooling on the charts, and I have dubbed it 'Global Warming Causes Global Cooling'.  It's amazing what you can do with computer models!

ps. More detail for Penny.  I use physics to make a hypothesis that it has been ocean currents all along, that give us these big warming and cooling cycles.  A drop of water contains 4,000 times the heat energy of a drop of air.  The oceans contain millions of times more heat energy than the atmosphere.  Thus, tail wagging the dog.  In order to survive, I have predicted that these people will have to stretch their concept of physics to a ridiculous point.  They must use their super-debaters (not master) to argue that carbon warming causes a false appearance of global cooling.  That the heat is just going deep into the oceans, and will come back 'any day now'.  They will not be bothered that they must change the laws of physics, and assume warm water sinks into cold.  They can argue eloquently that all the physics was done in 1790.  I predict they can hold this position for at least another year.

pps.  OMG, that was a solid 3 feet of snow in the driveway.  My single-throw 6 hp Honda was chugging.  I had to break up the drifts by hand.  The neighbours say that now they will go out and buy a snowblower.  Good luck with that.  Smart people listened to me and got their snowblowers when the stores still had them.