I forgot to do this, what with all the excitement.  My predictions are never right, but they serve to humble me.  :)

Covid:  By the time the vaccine is given to everybody, we'll all have had it.  There is no physics in this Grand Stupidity.  When we all get the vaccine, we'll say "Man, that stuff works!".  Nobody will be the wiser, nobody will learn anything.  We should be giving out free, cool goggles for the young people to wear.  Don't wear a useless mask, go to parties.  But, ain't goin' to happen.

Climate:  Carbon will zoom up, temperatures will go down.  The warmies are now resorting to 'total fabrication', rather than just cherry-picking.  That's because there are no warm places left.  The irony is, that it is just Canada that is a tad bit warmer than normal, and we are as cold as trumpy's heart.  It's just that we aren't at our normal cold, of ivany's ice queen. (Ha, I was going to say something inappropriate). 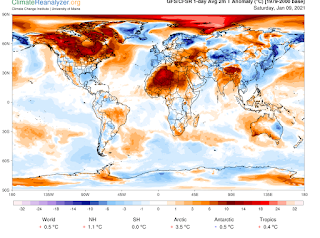 The prediction is that we will soon join the world in being colder than normal.  Let the warmies tell stories about how hot the Sahara is.  Who cares?

Earthquake:  We will have a huge earthquake, somewhere in the world.  I just had to throw that in, because the odds are hugely in my favour, even though nothing has happened in the last few years.

Toronto housing - There's no money coming in.  It's just speculators holding on for dear life.  It's an inbred market, and like an inbred dog, it will soon start biting everybody (just like mad kings).  I've been predicting this since 2007. 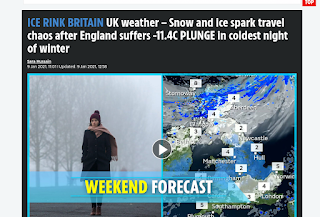 The prediction is that the UK will look upon this winter as being mild.  :)  But I did predict that they would have backyard ice rinks, and now the whole place is an ice rink.  Soon we'll have British hockey players in the NHL.  :)

pps.  and bittycoin will go up and down.  All the dirty money is there now, and it can only be a laundry with agitation, so the whales will pump it here and there.