Hiding has been the best for me.  My readership is approaching absolute zero, which is where the world is going.  The big news from Ottawa reminds me of the old company.  They used to hire high-energy women once in a while to look good.  Meanwhile, all the other top people were old drunks in a boys club.  (this is totally different now).

The women would never last long, they would go nuts trying to get anything done.  That was the general rule, the more things you actually did, the more trouble you got into.  Out in the field, to get anything done, you needed 5 different unions.  One engineer got into big trouble when he lifted a box without the 'box lifter union' (slight exaggeration).

A great reason for hiding is that the bidens are going after 'false narratives' which they define as anything going against their group-think.  And the right is totally crushed by the failure of their main conspiracy.  The big mistake for their conspiracy, was precisely defining the end point.  Warmie group-think never defines anything.

Now, the right is attacking the left for the fact that nobody works in Ottawa.  And the new leftie trend is to let people work until they're 90, and brain-dead while standing.  And you know that the freelands would transfer all those people to the posh palace.  :)

I survived the 'no working' culture by not working very much.  I would have short flashes of brilliance followed up by years of reading novels printed up to look like reports.  I still did more than anybody but it was invisible.  The supervisors used to yell at me (in a lazy way) to appear to be working more.  I still did go nuts when the huge waste of money got too much.  That's what drugs are for.  :)

ps. and the darn UK is making fun of Toronto - Ha! 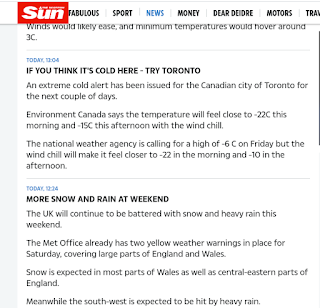 I think they're just getting back at me.  :)

pps.  i'm just thinking of the right wing believing the palace staff about lady-di, in order to go after a leftie leader.

omg - the us warmies are so powerful that they can cut off all the gas and oil to Ontario.  Run!

Keep it up. In are Green New world in your estimate will a battery get us as far as petro fuel.

The concept of batteries for transport is a big story, simply because it doesn't scale. You need lots of rare elements for batteries, and the energy density is poor. It's a bit like solar cells and wind turbines. All needing rare earths and enough carbon to be ten times worse than a diesel engine. But, a nice story.

I'm just saying this because nobody reads the comments. When the carbon balloon bursts, then we'll probably go with methanol fuel cells, and super-capacitors for recapture and bursts. I'm hiding and not writing anything.

It's funny that at 'Peak NDP' they destroyed all nuclear, and now 'Peak Warmies' are going to destroy all oil and gas. Poor, dense Alberta. All they ever did with their universities was to find how to discover more oil and gas. And now, in their comments on natpost, they just want to kill everybody. Wouldn't be nice to see a spark of intelligence? Perhaps some physics? But, nope. They will forever be a 'concentration camp of thickness'. I was going to say the 'stu' word, but that would get me shot. :)

Thx for your info. In my conspiracy thinking mind something is coming that I don't think any of us is going to like. Without cheap power how will we survive. I believe what you are saying about the earth cooling. Will we have enough food for everybody on this earth.

It's all fine. We are lucky in that all agriculture and farmers will soon be gone. Right now all the good tomatoes grow inside, and soon you won't need plants and sunlight. Fusion may come someday, but I don't think anybody has the brains for it. All industry will be 3d printing, so we can just cast off China and Alberta. :) As the ice sheets grind over us, we'll be underground with panels acting as windows. I will be happy in my peaceful oblivion. The surface will become wild with polar bears.