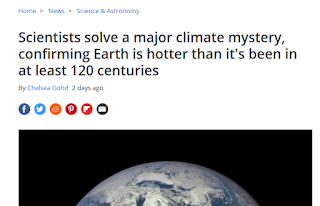 We can celebrate that the world is warmer than at the peak of the last ice advance.  Phew!

Specifically, the team demonstrated "that late Holocene cooling as reconstructed by proxies is a seasonal signal," Bova told Space.com.

To do this, the team developed a new method that allowed them to "use seasonal temperatures to come up with annual averages. Using our new method, we demonstrate that Holocene mean annual temperatures have been steadily rising," Bova added.

I looked everywhere on how they got that 2020 result, when the end of last year was extremely cold.  But now, I'm happy.  Also, it is amazing that there is a seasonal signal in the world temperature data, when you would think north and south seasonal signals would cancel out.

Until they share their secret method to remove signals, I am forced to go the old way and assume the carbon hypothesis was uniform and the world temperatures (and sea levels) have no seasonal signal.  I'm so yesterday!

Also, those darn polar vortex fairies are really active around the world.

Honestly, people should just stop believing in them....

ps.  they should release this as an 'Airbrush Your Signals' app, for zoom calls.

pps.  it used to be that polar vortex fairies were confined to small patches of cold.  Now they are over the entire world, with huge amounts of negative energy, descending without displacing, shooting beams of cold energy.  I'm going to write a book -- Phantastic Phantasy Physics.

That's why I only read fantasy novels. There's no physics to constrain things. Physics is a real downer. :(