Ignace, the next victim in the nuclear waste pony show 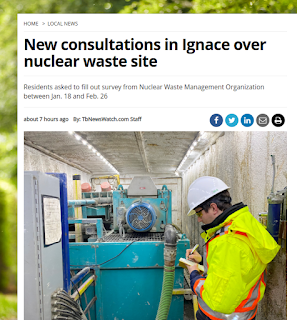 This is not like "Oh, they are going to get sprayed by radioactive waste', rather it is just a question of zooming to a town, having a big party, and then leaving.  Is that a bad thing?  It depends on expectations.

As with Bridgerton, you can trifle with affections, but if you get married in the end, then everything is fine.  But, here, there is no hope of a happy marriage.  The Duke moves on.

This is another fine example of a physics disaster.  The study of Rock Mechanics is physics - force, stress, water flow, heat energy.  That was my speciality and I studied it a long time.  However, the field has gone away, thanks to the 'Great Movement' away from anything that makes sense.  Instead, we have short-term efforts that look good on social media.  These waste people are employed to look good.

What's wrong with them studying the worst places on earth, in the worst possible way?  Nobody will get killed, it's only hundreds of millions being wasted, and not trillions, like those other physics disasters.

I just have an affection for this one.  They are treating this like a mining project, and we can sink a mine in anything.  I'm not really going into any great detail, because this is just like fighting carbon warming, no debate with lawyers is going to solve anything.  In fact, because of lawyers, I'll just say this is all wonderful, and who need physics anyway?