California to be caught in an ARS Clamp

This is interesting.  A record-breaking Kardash is hitting Callie.  This is probably a 5 on the ars scale.  At the same time, a skinny ars is coming down from Alaska.  They'll have flooding for sure.

Their news also calls these things Tropical Atmospheric Rivers or TARS.  That's good, since I'm running out of ars jokes.  Our ars is spent, but there is a residual sniff that will give us some ice and snow before the default temperature of -10.  The Huntsville default is -20.  Next year, Georgian Bay will freeze early, and we'll be at a good -40 for up north.  Alberta's default is still -40 since they are landlocked.

The tar-babies are hitting the Arctic Ocean, so we are getting a balmy -20 up there.

ps.  wow, Toronto is being hit with a 'reverse Buffalo' snowfall.  They'll have to refurbish those 'Emergency Snow Route' signs.  They've been allowed to rust over the past 20 years. 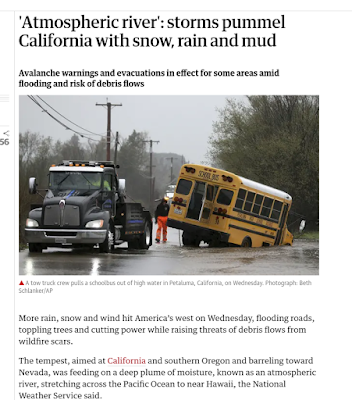 All of a sudden, the Guardian has stopped mentioning climate change, when they report on severe weather.  They were going nuts with the fires, but not the snow and flooding.