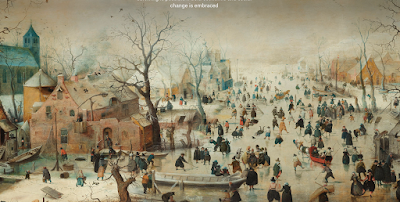 This is a wonderful article fully predicting what we are going to see in the next 20 years.

Midway through the 17th century, Dutch whalers bound for the Arctic noticed that the climate was changing. For decades, they had waited for the retreat of sea ice in late spring, then pursued bowhead whales in bays off the Arctic Ocean islands of Jan Mayen and Spitsbergen. They had set up whaling stations and even towns in those bays, with ovens to boil blubber into oil. Europe’s growing population demanded oil for lighting and cooking, and for industrial purposes that included the manufacture of soap. Now, thick sea ice kept whalers from reaching their ovens even in mid-summer. Climate change, it seemed, had doomed their trade.

The whalers just adapted and came out on top.  The Aztecs, though, had a miserable time of it.

ps.  oh, oh, immigrant-girl from Ukraine now feels she was tricked to come to Canada.  All the glossy brochures, and none mention winter....   :)

pps.  the stories are now starting that the cold is due to climate change.  Last year, it was a dancing jet stream, what will be this year?