Wow, the longest series in a while.  I'm inspired because of the snowstorm and the huge lineup at the local garage for snow tires.  All the Alberta farmers saying:  "We haven't had this since 1972.".  Makes me happy that all my prediction-chickens are coming home to roost, but my feet are frozen.

One more thing -- Plate Tectonics.  Everything would be as simple as the warmies portray things, if it weren't for the fact that we are on a hard shell over a chewy caramel filling.  In technical terms that means we have continental plates over a hot, viscous mantle, and these plates go back and forth, and, most importantly for us, up and down.  (Do the Hokey-Pokey!).

We go back a few billion years.  Life started early, and we have been in shirt-sleeve warmth ever since, so there is some wonderful temperature regulating system that we can call God.  Or... water if you want to be more scientific. 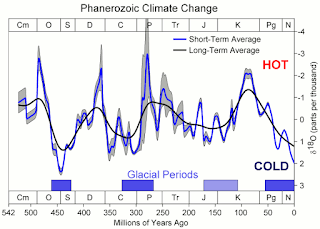 These big cycles go back longer than the chart, and are not caused by carbon dioxide.  They synch with plate movements.  When all the plates are together, we have crustal thermal insulation.  All those oceans of water and sediment crap are baked, and released into the air as water vapour and carbon dioxide at 10 times today.  But the water vapour dominated.  Big warmth!  Mammals became small and reptiles became big with the last one.  Then the continents separated and became cold.  The dinosaurs asked for god-assisted suicide in the form a big meteorite, because they couldn't take the cold any more.

The last 2 million years we've had northern continental glaciation, off and on, on a 20,000 year full cycle.  If there is a continent or big island that is propped up by hot mantle, near the poles, then it is constant continental glaciation (Antarctica, and Greenland).  If we had a big, high continent on the North Pole, then it would be solid ice.  But Plate Tectonics has denied us that pleasure.

ps.  I'm thinking of that wonderful song by the sparrows - Canada Dreaming and the lyrics "We haven't seen that snow since 1972."  Brings tears to my eyes.