Another Nail in the Carbon Coffin

In order to push the carbon story, the warmie English Majors felt they needed to make up stories about past temperature cycles.  I don't know why -- people just like to go with any old story.

Anyway, the glacial cycles just had to be due to carbon dioxide levels, because that was before the steam engine.  This study shows no such thing and even demolishes the ice cycles due to a small cycle in the Earth's rotation.

These findings will by ignored by the majority, just as the cold is ignored.  But, can you really ignore the cold?  :)

You have to remember they made up a story about the Himalayas rising and sucking up all the carbon dioxide.  That was nixed by studies.  And they have made up a story about all the heat recently being sucked up by the oceans like an air conditioner.  That is deprecated by the fact that sea levels are reflecting global temperatures.  If a magic heat pump existed, then sea levels would rise against the temperatures.

Right now, all the warmies end their temperature graphs at the 2016 El Nino peak.  Given the state of the popular press, I think they can carry on for another year or two.

ps.  the one thing that is an exponential rise with feedback loop is the number of papers going against carbonistas.  It will be a flood soon.

pps.  I saw snowflakes in Toronto! 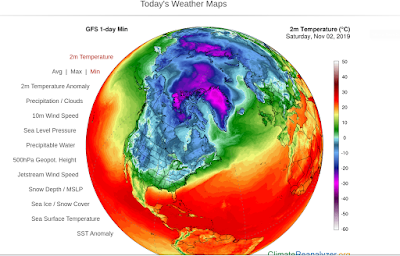