Graham Earle, Warrior to the End 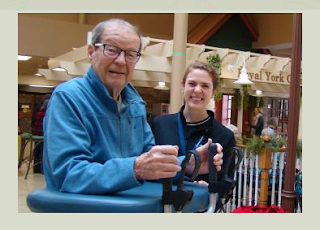 I hesitate to write this, expecting his phone call any minute, but since he didn't call I expect it is over.

The article covers his first fight against Death, when he went into a total remission and fought back to ride his bike this summer.  We met about 10 years ago and we were both retired engineers, so we did what engineers do:  make fun of the 99.99% of people who can't do math and physics.  The family didn't like me.

But, the cancer came back and his bones were riddled.  When the doctors said there was no hope, then he bravely chose physician-assisted death.  If he couldn't laugh at everybody, it wasn't worth it.  I feel the same.  There was some urgency since the doctors felt he could become non-aware at any moment.  You have to be bright, right until the end.

He shared my sense of humour, and that's rare -- there's only 10 people in the entire world.  The day before 'the big event' I spent some hours with him going over the latest warmie sillies.  On the final morning he said he would gorge on his favourite cheese, and guzzle his favourite wine and not worry about the digestive consequences.

If it went right, he would have been put to sleep in front of family.  Then the doctors would push the plunger of the red vial.  Pleasant rest old guy.