Once in a while, I'll sum up my current working hypothesis on ice age physics.  This is a testable hypothesis which can be shot down with good old-fashioned field physics experiments.  The Scientific Method has done well for humanity, but it has been displaced by back-fitted stories.

In the long term, we have been in an ice age for the past 2 million years.  Thank goodness there are interglacials, where we can warm up a bit.  Ice advances happen in half cycles of about 10,000 years, and full cycles of 20,000 years.  More or less.

Ice advance cycles have never happened in the Southern Hemisphere or the tropics.  That's because the SH is in a permanent ice advance with Antarctica. 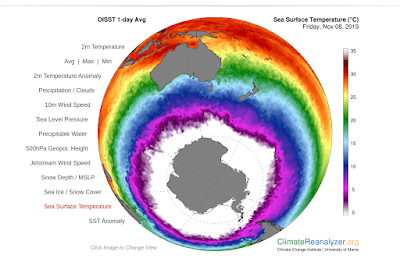 This is the ice cover and water temperatures for the South Pole region.  Since satellites, the temperature has been rock solid.  When they talk about 'melting', they are only fiddling with the outer ice, and has no relevance to ice volume, which cannot be measured.

This has the amazing effect of repelling tropical atmospheric plumes, which are the main mechanism for spreading warmth over the planet. 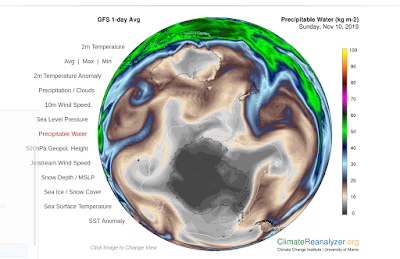 That cuts off half the hemisphere (a hemi-hemisphere?) from warm and cold cycles.