I was going to a video, but I'm too ugly. So this is a photo essay on the rock that is in the news. You can decide the political fate. 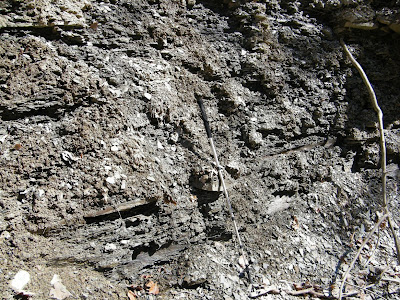 There it is, exposed in a valley in Toronto. Why are we up in Toronto, when that nasty rock is destroying in the Niagara Tunnel? Ah, the wonders of geology. That rock lies in thick beds which tilt up towards the north-east. That means it's very deep in Niagara, but outcrops in Toronto! If you want to learn your Queenston Shale, it's here. 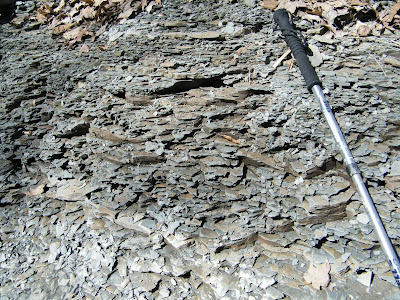 I've just decided to call this 'Popcorn Rock', because it is completely different when it is down in its natural state. When it comes up, it 'pops' like this, and weathers rapidly. 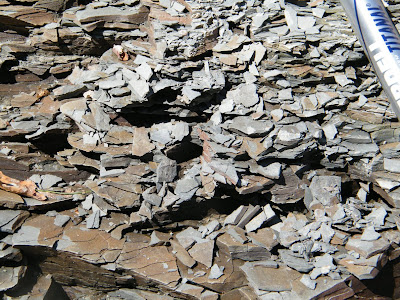 Here is a close up.

And look at this! The nasty vertical fractures that hit everybody by surprise. They are invisible when the rock is all compressed in its natural state, but they come out when the rock is stress relieved, such as you would get when boring a tunnel. Here, the insitu stresses are relieved by a stream cutting. 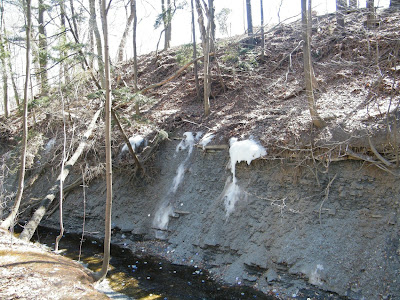 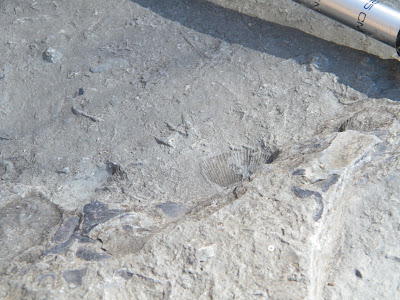 I love the fossils: clams and worms. (Hint for Canadian Science Ministers: We went with the worms!). 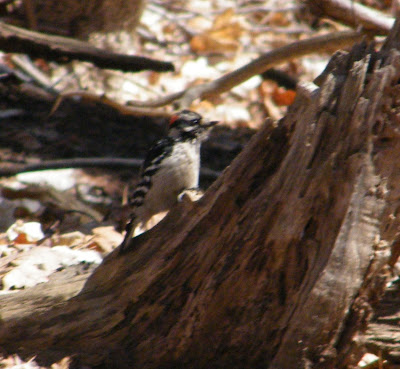 This little guy laughs at all those who didn't know about this shale.
Posted by Harold Asmis at 2:37 PM

Is the bird a mockingbird?

No, it's a Downy Woodpecker.

Another site with larger scale and historic content. For reference.

OMG! Where did you dig up that? I wouldn't argue with him. Nope, I'd run like hell!

Robbins makes best TBM's for shale supposedly but that would be a single or double shield machine and a steel and concrete shell installed behind.
The machine used is a single beam that is (obviously) adversely affected by Queenston shale conditions.
They had to know.

In their Niagra promo sheet they say ...

" The tunnel is located predominantly in Queenston shale with some limestone, dolostone, sandstone and mudstone up to 200 MPa (29 ksi) UCS. The rock along the tunnel bore path is known to have high in-situ stress and there is potential for squeezing ground. "

Which according to my geo .. er.. earth sciences classes with perfesser A. here is a fairly accurate description of the conditions they have encountered.

" The Main Beam TBM, the largest hard rock TBM in the world, was assembled onsite in under 12 months -- ahead of a tight delivery schedule. "

And in the double shield promo they state ...

" Fractured rock can be an insurmountable obstacle if you buy the wrong machine. Your crew safety and efficiency is at risk, and so is your schedule. With a Robbins Double Shield Tunnel Boring Machine (TBM), your project can have a great safety record and peak performance. "

My goodness, you're turning into a little rock mechanics expert!

The machine was a used one somebody had hanging around. They wanted to be cheap, since if they built it right, it would cost too much.

And don't forget, a Mel project is like Pearl Harbour, somebody knows it's coming, but nobody listens.

I was looking at some of that shale, or something very like it but with even finer layers, at Yonge and Bloor where they are digging up the southeast corner. They seem to have struck it just a few feet down.

It makes for a very good foundation, earthquake-wise.