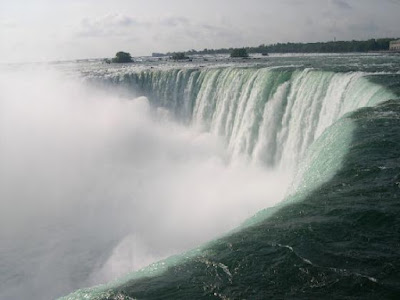 Looks like this film production of Niagara geology is on again, and I'm involved. Too bad I'm so ugly. Maybe they could do that digital stuff like the Brad Pitt movie!

This would make a great HD production!

Cue the Falls: Thunderous water dashing down on rock. The view from the tunnels.

Cue the Heroic Investigators: Yet something is sinister about the rock. It doesn't like tunnels. Sherlock Harold goes down into the old smashed tunnels, the scene of the crime. He shows the overcoring tools, to define the rock. Boy, is he ugly!

Cue the SEM: A detailed look at shale microshears in HD.

Cue the Effort: A tour of the latest tunneling effort, focusing on the heroic efforts at the tunnel face.
Posted by Harold Asmis at 1:04 PM

Oh pooey! They are going conventional!

Neat. They should have tacked the tunnel on it.

Do they need an exploration geologist with GPS to map out the falls, etc? I am available!

Nah, they had to do this all of a sudden in a big hurry. They will follow the company line of "unexpected vertical fractures" and just telephone a professor or two. I can't blame them.