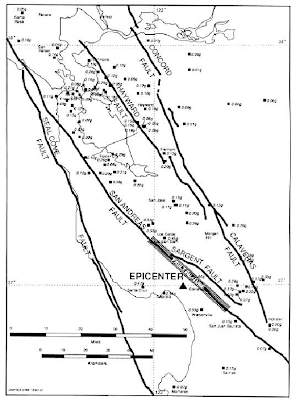 This series highlights earthquakes that were famous for me, in the sense that I found something interesting in them. The Loma Prieta earthquake interested me since it was a repeat of the 1865 earthquake. This was followed by the big 1868 earthquakes along the Hayward, and then the 1906 earthquake. Thus, I saw it as the beginning of a new series. The Hayward sequence hasn't happened yet, so it's not a firm pattern.

So, in essence, this M7.1 1989 earthquake was a dry run for the next big events. And how did everybody do? Not too well. If there had been just a couple more fires, they would have overwhelmed the fire departments, and we might have had a firestorm. As such, we will just have to wait for the 'big show'.

We are also suffering from the aftermath of the 1906 earthquake. You would think, after this event, it would be like Longbeach 1933, and there would have been lots of tougher building codes. But noooo. Like Homer, they didn't learn a thing! That's because the whole thing was pushed as a 'fire', and not an earthquake. Earthquake? What earthquake?

So, a lot of crap was built after 1906, quite fireproof. This showed up in the 1989 earthquake which just touched into the damage. A lot of 'soft stories on muck' were damaged, but only some. Many remain. Tons of pre-70 concrete buildings, and this earthquake only cracked them.

As usual, power facilities on firm ground were undamaged. Like 1906, anything on rock was undamaged. But this earthquake showed what is really going to happen when the 'series' starts up again.
Posted by Harold Asmis at 8:52 AM