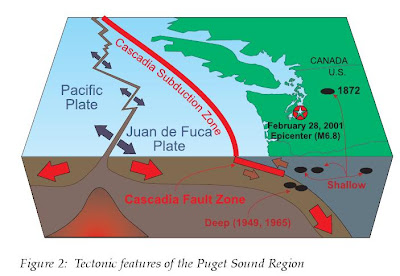 Ok, this earthquake was another lesson on how everybody wants to give an obscure name to a big earthquake. Heaven forbid if the good name of a city would be so besmirked by naming an earthquake after it! So although we all call this the Seattle earthquake, it's official name is the Nisqually Earthquake, wherever the hell that is!

Actually, at the time, we quickly called it the Starbucks earthquake because of the very light damage to quaint old brick buildings where there was usually a Starbucks. This earthquake struck me as how there could be such a huge variation in damage between equivalent magnitude earthquakes. At M6.8 this was as big as Kobe or Northridge!

Yet, it was a damp squib. That's because it was deep, and most likely in the descending slab. It may have ruptured downward, which made it even more whimpy. I never did find PGV's for this earthquake, but the PGA was 31% g, and I would bet the PGV's were around 50 cm/s or less.

So, Seattle got off lightly. Had the earthquake been in the upper crust, and had there been a 'Fist of God' high pulse earthquake, we would have seen something!
Posted by Harold Asmis at 10:55 AM

Yeah, that was a nice little quake, though I have never heard it called the Starbucks EQ. Nisqually is a great name for it considering it popped close to the Nisqually River. Some of the highlights of the quake were the wee sand geysers that erupted in the area south of Seattle that is built on old fill.