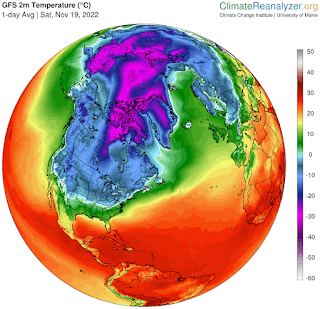 Now, this is a Clipper of Frozen Death.  It is being dragged down by the Pacific plume air being diverted down from the NW.  The plume air has the energy.  The clipper is a black hole that sucks the heat from your bones.  Once again, I've never seen this.

ps.  Mimic is working again.  You can see the mechanism of the Clipper of Death.

It's just a big chocolate fountain.  Meanwhile the cold blob in Europe is again moving fast.