The ocean plumes are giving us a nice fall.

However, the pattern is constantly shifting in the Pacific, so no certainty on forecasts. 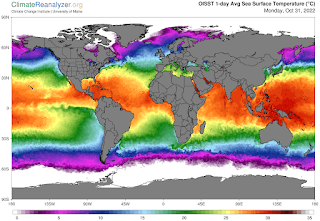 Both the Atlantic and Pacific are getting fed with cold Antarctic water, so cold is the watchword.  Up in the North Atlantic, the Gulf Stream is taking a huge dip to the south, with an unusual curve.  This will spell cold for Europe, once the Atlantic belt has let off its steam.

The current feeding the Pacific belt is very strong, although there are not enough floaters to highlight it. 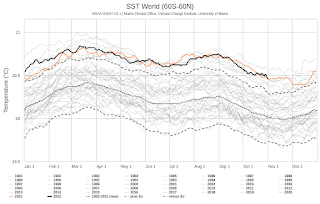 My favourite chart has finally stopped fooling around and has started the expected dip.  It was being quite shaky and horizontal for a while.  No physics is being done to see why.  The ocean temperatures should continue to go down.

I'm not waiting for all the monthly charts.  They are driving me nuts by coming out later and later.