This Pacific Current is Dead

Every day we go into new territory, regarding physics.  I finally got the latest ocean currents.  After 2016, we started with the death of the northern currents, and now the main Pacific current is dead.  It was always there for us, going mainly west, with some El Nino reversals.  There was no physics to quantify the energy changes.

We have no reference physics, so I can call this 'unprecedented' all I want.  Such a vague term. Anyway, the current has entered the 'Quivering Mass' stage of chaotic motion.  Hopefully, it goes back to normal. 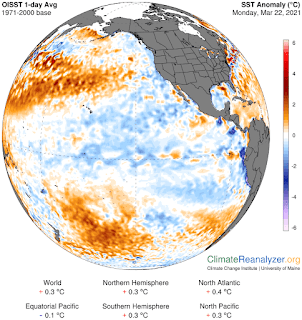 The temperature anomaly shows that nothing is there, in terms of a heat source.  It may be that everything is just 'average', like the entropy 'end of the universe' as total 'grey goo'.  There has always been something there before. 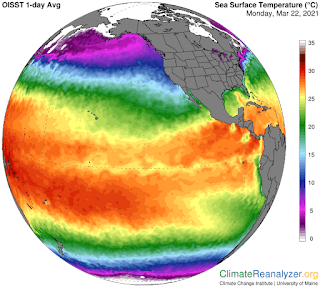 If the weather people knew physics, then we could categorize these events like earthquakes.  The 2016 El Nino was an M9.  The Halfsie El Nino was M7.  Nearly all La Nina's are M5.  This is like an M9 La Nina, or maybe something new altogether.

Nobody reads my backgrounder, but these ocean currents are the main 'heat pipes' of the world.  All our heat near the poles comes from the equatorial currents and generated tropical plumes.  With no action, we enter an ice age.  I'm not saying we are entering an ice age, because I'm starting to read a lot of fatuous articles titled 'No, we are not entering an ice age.'.  This the standard way of defending the failed carbon hypothesis.

Get poly-tunnels for your tomatoes!