Yeah, after a month of no updates, we have the new results.

The Pacific ocean currents look entirely normal.  We had a massive influx of Antarctic water, and that's dying away. 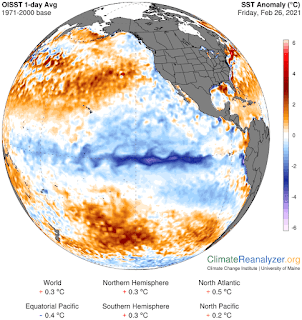 The sea surface temperature anomaly still shows the same, but it should start going away now.  My thoughts of having a very cold winter, were based on this huge blob of cold water.

But it turned out that all the tropical plumes were generated close to Japan, and could skip the dead area of the rest of the Pacific.  Normally, these plumes are generated and fed along the whole length of the current.  It has to be over 30C to generate a plume.

So, we are into new physics.  We never had this type of monitoring in the mid-70's when we started the big cold cycle after the warm 60's.  Our recent big warm cycle started in 1997, which had little monitoring, and then ended in a glorious blast of 2016.  We are now going back into a cold cycle.

I am suspecting that there is new physics when the air gets to -50 to -60C, but now we have sunshine and some warmth.  The UK is still grumping because there is no Gulf Stream.