Physics breaks out of subservience 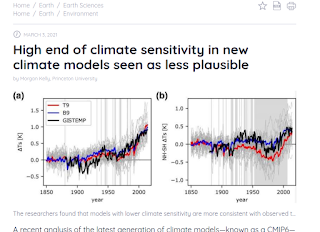 With the fear of death from warmie lip-flappers, the physics people were relegated to pathetic models that threw in a fudge-factor of 'climate sensitivity'.  This was the effect of 'greenhouse gases' on global temperatures.  For the last 5 years, the cowerers didn't go past 2016.

Now, they have grown a pair (up or down).  They have gone past 2016 and have found that the 'phoney factor' is tremendously low.  Now, they are all into clouds.

They have used the most mild language.

Instead, the researchers found that models with lower climate sensitivity are more consistent with observed differences in temperature between the northern and southern hemispheres, and, thus, are more accurate depictions of projected climate change than the newer models.

"Understanding how clouds modulate climate change is at the forefront of climate research,"

For years they put in the carbon fudge factor with the excuse that 'nothing else works'.  Instead of looking for something else, they dipped their heads and went with carbon.  Although I think they are way off with the new focus on clouds, it cuts off another leg of the wobbly warmie stool.

ps. also they have recognized that the north and south were heating differently, and this is not consistent with the carbon hypothesis.

lots of earthquakes going on New Zealand and Icelamd

Those earthquakes don't even count in those areas. On the map, they are buried in a sea of previous earthquakes.