Implications of an Ice Age 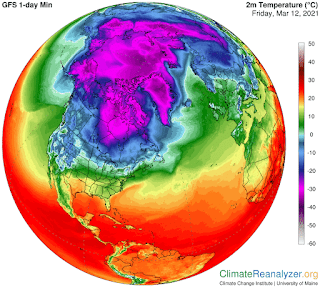 These are today's minimum temperatures.  Think of that as year-round ice.

NOT GOING TO HAPPEN!

When I talk about an ice age, it will be just a 70's cycle.  We'll have Florida oranges freezing, and that's about it.  The UK will have more snow.  La la la.

What we don't want to see is a big dive to 1800's.  That's when Toronto and Ottawa always had 10 feet of snow in the winter.  The UK could skate on the Thames.  At this point we can't tell what's going to happen, but we did have Texas, which was a hundred year event.  This last big freeze cycle broke in 1800, well before the first steam engine.  I don't want to have to chip the ice in the lake in the summer.

To determine what cycle we are in, we will have to do some physics.  As you know, all atmospheric physics was banned by nasa, when the Venus Guy took over.  We need to get back to that.

Once all the nasty warmies are out on the street, I can start my big work about how all this happened.  It will be in an NFT -- Ha!  That's too much work.  Somebody else can do it.