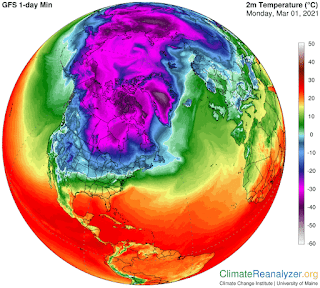 I was watching the blob against the warm Pacific winds, and it was defeated.  My hypothesis is dead.

It's getting too late in the season for another major blob attack.  I was surprised by the Texas freeze, so there must be other factors, such as a lack of Pacific winds, to allow the blob to advance.

So, for Texas, a blob attack remains at one in hundred per year.  Any normal person would design for that, like a hundred year flood.

ps.  I'm trying to show nasa that it isn't so bad to have a failed hypothesis.  We can have a game show!  Do you choose A or B?

pps.  all we are having now in Toronto, is a one day blow-down.

more:  and if you ever wonder why we got into this whole non-physics mess.

You are exactly dead on. This is why I trust reading blogs more than than the MSM. Did your neighbors house sell yet. A house on my street sold for way over what I thought it was worth.

No, the house is an endless source of amusement. It's like a whole parade of those people in the kid's tattoo show that drives me nuts.