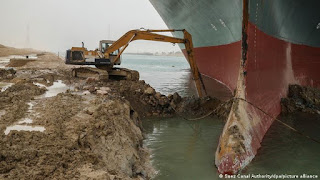 I have noticed in the last few decades that everybody has dropped the ball on standard 1 in 100 event designs.  In general, engineering ruggedness has dropped to about 1 in 10 (all single digit precision).

A rare event generally requires two independent failures.  We can always rely on that happening fairly often, since a single failure is common, and we always have backups to try to get things safer.  For example, a window washer would always design his rig to living memory.  Legislation tries to go to 1 in 1000 or 10,000.

In this case it was always a disaster waiting to happen.  Ships were getting bigger, but no new systems compensated for this.  They still relied on patronage-hired local pilots.  But in this case, there was a huge wind shear, and no monitoring.  This is 1 in 100 or 1 in 1000.  The ships have no automated side-thruster system to prevent the big swing.  Once the bow hit, then momentum would grind the stern in, and the props would dig a fine grave.  Humans just can't react fast enough.

This is the same with everything now, and I like to focus on nuclear plants and earthquakes.  Everybody goes with living memory.  In the old company, at the beginning, we would get creative with rare disaster scenarios.  Now, everything is run in a fine stalinist manner.  :)

As with all these disasters recently, a witch-hunt always wants to find one person to blame (scapegoat), or they just shug and say 'Who knew?'.  Same with covid, same with everything.  No physics means more disasters.

ps.  in a panic they probably reversed the props, digging everything in better.

pps.  these ships have become more unstable as they keep piling up containers.  They tip all the time.  A ship could tip in the canal, and that would be just as much of a disaster.

I've been watching the suez incident with interest.
so thanks for explaining from your unique perspective :)

I suspect it is like a nutcase stuck in the snow. Full power back and forth until totally buried. They are going to need helicopters to unload it, and then they have to dredge out the whole thing. Neat. Next time, pile the boxes higher! :)

just leave it alone for 48 hours. It will unload itself and float away.