First, a note about the study of history, or History.  This is just an entertainment, of no use to the world whatsoever.  Every history book written just confirms all the biases of the day, and people read it for comfort in confirming popular notions.  I enjoy it, because the purpose is for old men to make fun of the modern world, and all the people caught up in the moment.  Everybody is always doomed to repeat history.

Phrenology is incredibly cute, like kittens on the internet. 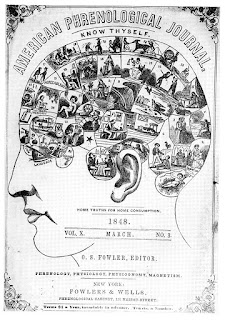 It took one wacky guy to put it all together.  He came out with an unbelievably detailed map of the skull, and many explanations of what each area meant.  For evidence, he cited some previous observations, but it all came from his head.  An amazingly original work.

So, how could a guy in the middle of nowhere take over the world?  It was mostly taken up by the early Victorians, or the later Bridgertons.  It was a time of great flux in the world, and great anxiety.  People needed the comfort to confirm their own biases.  And it was the start of the 'Penny Dreadful', or cheap pamphlets that flew around everywhere.  A massive change in popular communication.

Everybody seized on this, and soon you had a 100% consensus of those people who published in the type of journal above.  A time of great glory, and you could use it to discriminate against those you didn't like.

The surprising thing is that it just faded away.  No big ending.  It caused the 'formalization' of the Scientific Method, the need for mechanisms and such.  One guy tried various 'readings' and did the exact opposite of the manuals.  He got the same 'fantastic' results.  That was for palms, but other people probably did it for skulls.  By that time, they were firmly in the late Victorian era, where people knew 'cause and effect', and the Scientific Method.

That's it, and it has no bearing on the modern world whatsoever.

This is not very popular, so it's back to my usual unpopular topics. :)

More popular than you think. The perfect answer to our housing dilemna. http://www.ontarioarchitecture.com/octagon.htm Along with the emperor penguin huddle its gonna be ice age nirvana. 100% carbon free.

Smooth out the corners and you have a dome. Maybe make it all white. :)

Also, I have great happiness in thinking that nobody reads me. :)