Yeah!  Earthquakes are mentioned again.  We've had a huge drought in earthquakes, caused by climate change, since droughts of any kind are climate change. 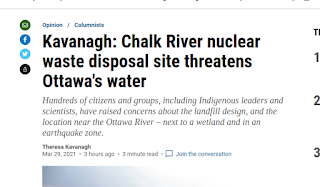 It's funny that the loose sand of that area has been choked up with nuclear wast already.  There is nothing you could do to make a difference.  I want that area totally paved over.

However, it is a federal cash-cow reserve.  It supports lots of people who don't know they are dead.  These places will exist forever.  So, in once sense, filling a big swamp with more nuclear waste makes sense.

They could have monitored what happened to all the nuclear waste poured into the swamp from the last big meltdown, but that would be useful information.  It has most likely all drained to Ottawa, and made that place what it is today.

So, raise a glass of radioactive water, and know that it is quite healthy for old guys.  Kills all the cancer.  Have fun!

ps.  the serious translation, is that this place probably has more released radioactive inventory than most armpits of the world.  Any proposed site would need a survey of existing conditions and they can't do that here.  The bound radionuclides and the wetlands probably freshen the horrible Ottawa river.