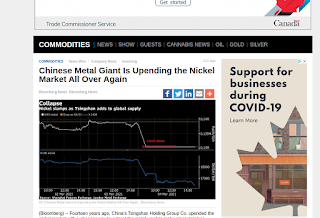 This is fun.  The leftie loonies got rid of all nuclear power in Europe, leaving Pootine to do anything he wants, since he controls all the natural gas for Europe.

They also got rid of all our freon, which is another story.

And now they are getting rid of all oil products, which just leaves Tesla.  And those guys need nickel, rare metals and rare earths.  tessyman was all in a pickle about nickel, but now there are no worries because China controls all of it.

So, when you listen to these guys, remember the type of future they want -- no physics, and a world controlled by Russia and China.  Yeah!  At least they think they won't boil to death.

If the physics people get their act together, then we can go with methanol fuel cells and  graphene super-capacitors.  Not a speck of lithium anywhere.  This is important stuff.

Trumpies new party, with a side-branch in Alberta aren't going to do it.  They just complain and kill people.  There was an Alberta article where they complained that academics are against them.  Duh!  Use money to pay them off and do physics.  They are all starving, and they must appear to hate Alberta to fit in with the culture and get jobs.  Do something, you whiners!

If I wrote this in the Natpost, then I would get all the haters.  Neat.

ps.  if I were Pootine and Big Killer Genocide Guy, I'd pour billions into the lefties, and micrysoft to put out shatty software.  :)  Oh, and the trumpies because they kill anybody with a brain.

This was a political rant. I just saw the article and thought "I hope you're happy now." :) I'll stop for a while.

I've got to read the article still
but thought I'd tell you we've started some seeds- not tomatoes yet
but hubby purchased a shelf and we're awaiting some grow lights to kick everything off as good as we can.

I'm looking forward to some better tasting lettuce. I'll tell you that much!