Carbon dioxide acts as an opaque thermal blanket on the Earth.  Even nasa now says that satellite global temperatures are accurate.  The satellites measure the same infrared band that is said to be blocked.  Therefore, a test will be to see if the calibration curve has drifted in accordance with increased atmospheric carbon dioxide.

The satellite measurements are now the 'gold standard' of the thermal apocalypse.  Our 'boiling alive' has to show in these measurements.  The calibration curve has to change with increasing carbon.  Yet, there is no drift in the calibration that I have heard of.  If there was a drift, you'd be sure to hear of it.  The silence is deafening.

With a constant heat input to the Earth, the act of piling on more insulation in the form of carbon dioxide must result in a monotonic increase in temperature.  There can be no 'flat zones' or, heaven forbid, a decrease in global temperatures. 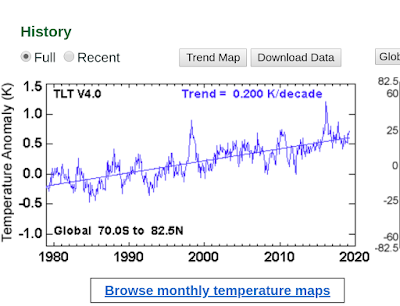 Taking out the El Ninos, we're talking flat as a board, and recently we've been going down.  The 0.75 C increase since 1980 is nowhere near the famous 'models' that are showing a rate 5 times this.